„DINGLE - Dust IN Galaxies: Looking through its Emission” is the project SONATA BIS 2020/38/E/ST9/00077 (funded by National Science Centre, Poland).

Just after the Big Bang, the Universe was only made up of hydrogen and helium.

We need to wait for the birth of the first stars to witness the appearance of heavier elements (metals) which can only be synthesised in their interiors, where temperatures reach tens of millions degrees. Metals are later released in the interstellar medium at the end of stellar evolution and new generations of stars are then formed from the metal-enriched gas. This process is known as the life-cycle of metals in galaxies. Metals are only the 2% of all the visible matter but they give origin to almost the totality of what we see on Earth, including living beings.

During their evolution stars can lose a substantial fraction of their mass, developing a dense and extended circumstellar envelope around them. This is one of the main sites for the formation of small solid particles starting from the available metals, known as "dust grains". In space, about half of the metals are condensed in dust. Despite dust being a small fraction (1%) of the total visible matter, it plays a crucial role in the evolution of the objects populating the Universe, including the formation of stars and planets that could harbour life.

The only way we have to study the properties of dust around stars and in galaxies is by investigating its effect on the radiation of stars. Indeed, dust grains absorb stellar radiation, heat up and re-emit this energy at longer wavelengths. Thus, the overall effect of this process is to modify the radiation originally emitted by stars and, consequently, the radiation that we receive and that we study. This effect is clearly shown in figure 1: in the upper panel we see the Milky Way in the visible band. The presence of dust clouds in the Galactic plane absorb the light from the stars and originates some "black spots". In the lower panel the Milky Way is shown in the infrared bands where dust re-emits the absorbed energy. We therefore see a bright emission at the Galactic plane where we have dust. By employing reliable theoretical models of the light emitted by stars and reprocessed by dust, it is possible to derive the physical properties of galaxies and to study how dust evolves from the beginning of the Universe up to the present days. 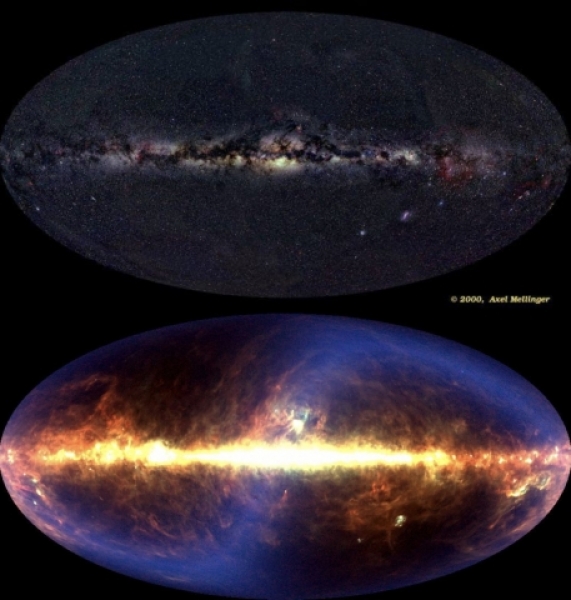 The project DINGLE aims to model dust formation around mass-losing stars and in the interstellar medium of galaxies, and to develop a reliable description of light absorption and re-emission from dust grains. The aim is to study dust in different galaxies and compare our theoretical models with their observations.

The project will increase our understanding of the life-cycle of metals and dust from the first galaxies formed to the present day.