Construction of the MARIA reactor

Construction of the MARIA reactor

MARIA is a reactor with a rather unusual design (Fig. 1). It is a channel and pool reactor at the same time. The fuel is placed in special tubular fuel channels, ensuring its effective cooling with water at a pressure of 1.7 MPa. The fuel channels along with the remaining elements of the reactor core, such as: blocks of beryllium moderator and graphite reflector, absorbing rods, containers with disc materials are located in the so-called the core basket in the reactor basin under a seven-meter layer of water. The reactor pool is a concrete structure with a steel lining. The pool is connected by a lock with the adjacent storage pool, which serves as a short-term storage facility for burned outfuel and irradiated structural and experimental reactor components. 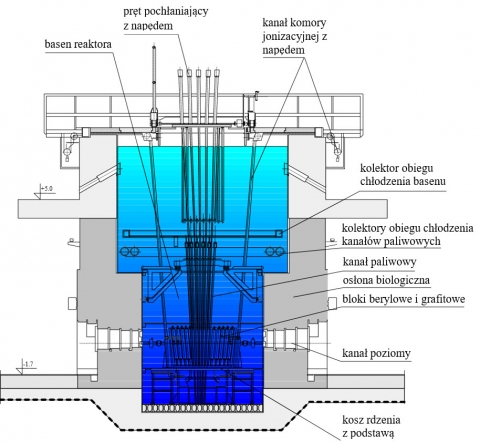 The core of the MARIA reactor has a modular structure, each time adapted to the production or research program. In addition to the fuel elements, there are beryllium moderator blocks, channels with absorbing bars and isotope channels of various types for irradiation of target materials. In the outer part of the basket there are graphite reflector blocks, devices for the irradiation of large-volume materials, such as silicon or minerals, and other experimental devices, such as an epithermal neutron beam converter. Directly behind the core basket there are channels for ionization chambers used for monitoring and controlling the reactor.

The concrete structure of the pool (together with the water in the tank) is the biological side shield of the reactor. At the height of the core, heavy concrete with a density of 3.6 g/cm3 was used. There are 8 holes in the concrete cover. In six of them, horizontal channels are located, which output neutron beams used for physical research.

The cross-section through the core of the MARIA reactor is shown in Fig. 2. The configuration shown in the figure contains most of the typical core elements. In addition to the previously mentioned, there are also channels for irradiating uranium wafers for the production of 99Mo and hydraulic mail channels for conducting short-term irradiation. Arabic numerals and lowercase letters indicate positions of fuel channel sockets, Roman numerals and capital letters indicate the positions of beryllium blocks. 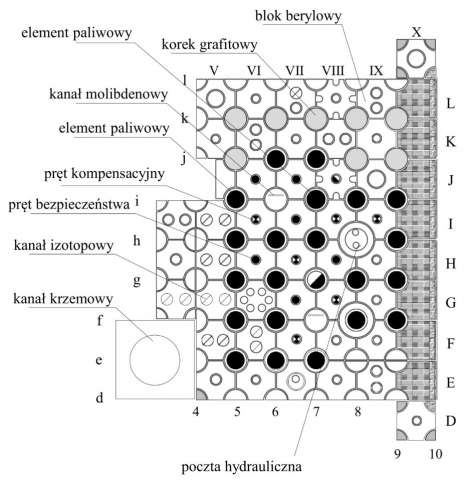 The reactor is controlled and protected by means of absorbing rods filled with boron carbide (neutrons are absorbed in the 10B isotope). Compensation bars (PK) are used to compensate for the effects of poisoning the 135Xe and 149Sm reactor, fuel burnout and temperature effects. The safety bars (PB) protrude above the core during the reactor operation and are used to switch off the reactor. A single automatic control rod (PAR) works with the automatic power control system and allows the reactor to automatically maintain a constant power level.