History of the MARIA reactor 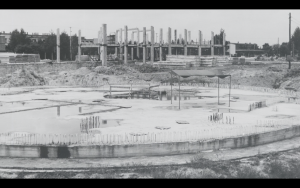 In 1964, a program for the use of the second Polish research reactor was developed, according to which the reactor was to be used for:

The construction of the MARIA reactor was started in 1970, and the reactor reached its critical state for the first time on December 18, 1974. This reactor, designed and built by Polish specialists and technicians, was designed as a multipurpose reactor with a high neutron flux – with the task of supplementing the research capabilities of the EWA reactor. This reactor was also built to conduct material research necessary in the construction and operation programs of nuclear power plants.

The reactor was operated until mid-1985, when it was thoroughly modernized. The subject of the modernization activities was:

After the Chernobyl accident, there has been a change in the approach to safety analyzes of nuclear reactors. As a result of the analyzes, the MARIA reactor was equipped with a number of modern systems that eliminate the occurrence of specific events or minimize their consequences. A passive system for flooding the fuel channels with pool water in the event of a pressure drop in the cooling circuit of fuel elements was installed, and new structures of horizontal channels leading the neutron beams from the reactor were installed.

The reactor was restarted in December 1992 and since 1993, after going through the energy start-up procedure, the MARIA reactor has resumed normal operation, which continues to this day.

Since the EWA reactor shutdown in 1995, MARIA has been the only nuclear reactor in Poland. It is worth emphasizing that the current operational program of the reactor almost exactly corresponds to the program of use, proposed almost half a century ago.

The reactor is subject to continuous modifications aimed at either improving its safety or related to the program of its use. The most serious changes concern nuclear fuel. Originally, the MARIA reactor used fuel with 80% enrichment in the 235U isotope. In 2000, the introduction to operation of fuel with 36% enrichment was started, and in September 2012 – fuel tests below 20% enrichment were started. Also in 2012, the cooling tower was modernized.

In 2014, the process of converting the reactor to low-enriched fuel was completed, this change was combined with the modernization of the fuel channel cooling circuit – the main circulation pumps were replaced and new decommissioning pumps were installed. In the same year, the export of spent fuel elements to the Russian Federation was completed under the international Global Threat Reduction Initiative (GTRI) under the auspices of the US Department of Energy and the International Atomic Energy Agency.