Compact Muon Solenoid (CMS) is one of the four large multi-detectors installed at Large Hadron Collider (LHC) to detect particles produced in collisions of protons with heavy ions accelerated by LHC. The detector makes possible to identify all kinds of the produced particles and to observe a broad range of physical phenomena. Even if CMS is 21 metres long and 15 metres high, its designers considered it appropriate to use the “Compact” term in its name. The “Solenoid” term reflects the fact that the detector inner part is surrounded by a large solenoid magnet (coil) producing inside it an uniform magnetic field, which bends paths of charged particles traversing the detector and that way helps to determine the charge and the momentum of each such each particle.

CMS is like a large lying barrel with a beam pipe along its axis. The pipe of a few centimetres in diameter is a passage for the two beams of particles accelerated by LHC. The entire remaining volume of CMS is filled up with many layers of various detectors arranged similarly like layers in an onion. 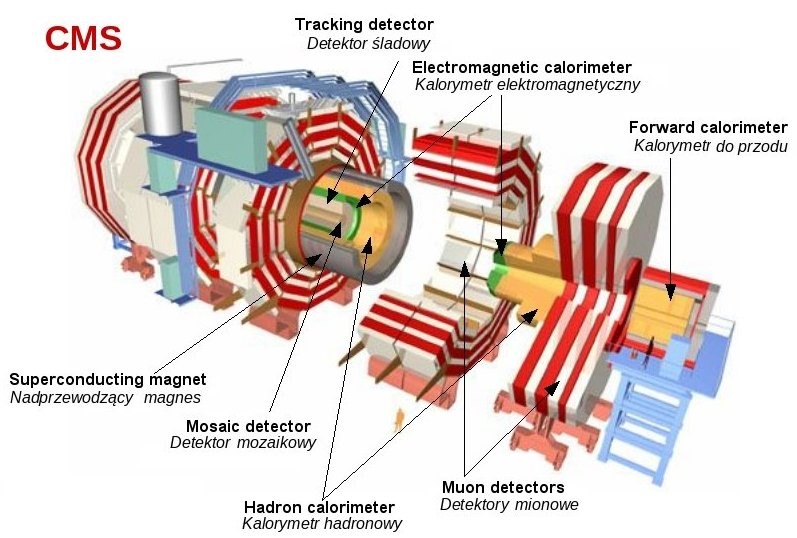 Scientists hope that some so-far unknown particles will be produced in the observed collisions. Most probably they will be living so shortly that they will decay into some secondary known objects even before they will manage to reach the first layer of the CMS detectors. However, analysing signals left in subsequent layers of detectors by secondary objects physicists are able to reconstruct basic properties of the primary object. Such analyses helped to identify quickly decaying electrically neutral particles of about 125 GeV mass. Properties of those particles deduced from the observed reaction products fitted very well the Standard Model predictions for the Higgs boson.

Contribution of the Warsaw CMS Group to CMS development included design and construction of electronics circuitry for the CMS muon trigger. Signals produced by the trigger are used to automatically select potentially interesting events, which should be logged for further off-line analyses.

Physicists from the Warsaw CMS Group participate in analyses of the data logged by the entire system. The analyses are targeted at search for Higgs boson in the so-called 2-tau-lepton decay channel, at search for hypothetical particles predicted by the super-symmetry models, and at investigation of proton internal structure. Collisions of heavy ions also within the area of interest.