The interaction of neutrons with matter leads not only to the formation of radioactive isotopes, but often to changes in the properties of materials. This is the case, for example, in the irradiation of some high-temperature superconductors with fast neutrons, where a significant increase in critical currents is observed as a result of such irradiation.

Reactor neutrons are also used in the silicon neutron doping (NTD) process. The physical basis of this process is the 30Si (n,) 31Si 31P reaction. The resulting stable phosphorus isotope is an admixture of the n-type in silicon. The semiconductor properties of silicon (specific resistance) are determined by the level of phosphorus doping, i. e. the concentration of 31P. This in turn depends on the fluence (dose) of thermal neutrons that the silicon received in the reactor.

The key quality parameter of the NTD technology is the homogeneity of the neutron field in silicon, because only then can a homogeneous level of doping be obtained, exceeding the classical methods of doping. In the MARIA reactor, large-sized silicon samples (cylinders 50 cm high and up to 6 in diameter) are irradiated in a specially adapted channel. The figure shows schematically the area of ​​silicon irradiation in a silicon installation and the method of ensuring axial and radial uniformity of the neutron dose. In addition to the continuous rotation of the sample during irradiation (radial homogeneity) in the middle of the irradiation cycle, the silicon cylinder is turned up and down (axial homogeneity). 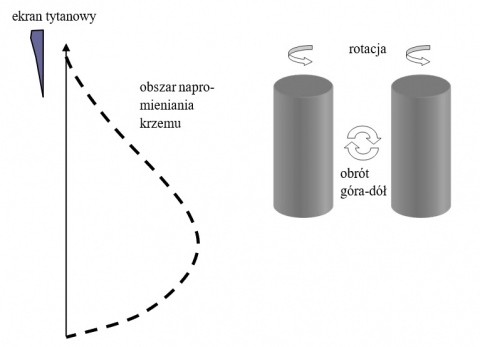 Diagram of silicon irradiation in the MARIA reactor