Generation of radioisotopes in the MARIA reactor MARIA

For the production of radioactive isotopes in the MARIA reactor, several dozen so-called isotope channels, characterized by different intensities and energy spectra of neutrons. The target materials from which the radioisotopes are generated are generally irradiated in aluminum containers.

The production of radioisotopes, expressed in the number of containers with target materials irradiated in the subsequent years of operation of the MARIA reactor, is shown in the figure.

Technetium-99m is a particularly important radioisotope that is used in 80% of nuclear medicine procedures. This isotope is a decay product of 99Mo (this decay occurs in the so-called technetium generators). Molybdenum-99 can be produced by activating the natural isotope 98Mo, but the most efficient source of 98Mo is the fission of uranium-235.

In the MARIA reactor, uranium shields for the production of 99Mo are irradiated in specially adapted fuel channels. Thanks to the efficient cooling system, which is the cooling circuit of the fuel channels, high splitting densities and thus high 99Mo activities can be obtained in the uranium plates. The duration of irradiation of the wafers is approximately 140 hours, which allows for the completion of activation of 7500 Ci 99Mo out of 40 grams of uranium-235. After irradiation and a cooling period of several hours, the highly active uranium plates are transported to a processing plant (Petten, the Netherlands), where the 99Mo isotope is extracted.

About 10% of the world demand for this isotope is obtained from uranium targets irradiated in MARIA, in the record year 2014, when it Was necessary to replace other reactors temporarily shut down due to renovation, it Was as much as 20%. 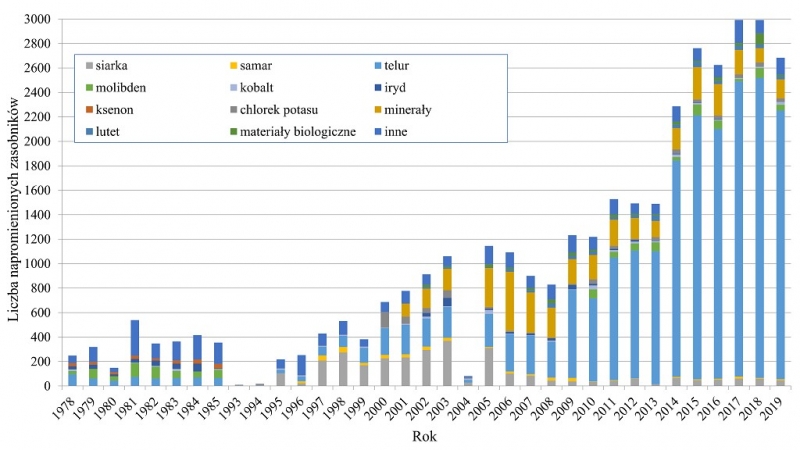 Production of radioisotopes in the MARIA reactor