The jury decided about the selection of this year’s laureates of the awards of the Director of the Fundamental Research Department of NCBJ, the jury composed of prof. Justyna Łagoda, prof. Agnieszka Pollo, prof. Michał Bluj, prof. Zygmunt Patyk, prof. Michał Spaliński and the Director of DBP prof. Stanisław Mrówczyński. At the ceremonial symposium organized for this purpose, prof. Mrówczyński introduced the winners and briefly discussed their achievements, and presented the participants with diplomas.

In the category of scientific or scientific and technical achievements, the award was given to: 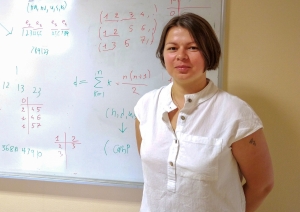 – PhD. Varvara Batozskaya for the analysis of CP symmetry breaking in Bs0 decays based on data from proton-proton collisions in the LHCb experiment

In particle physics, a very active area of ​​research is the search for physics beyond the Standard Model (BSM). One of the methods of such research is the indirect method, by means of precise measurements of phenomena well known in the Standard Model in order to observe the inconsistency of the experimental results with the theoretical values. This method is used, for example, when observing space-charge symmetry (CP) breaking signals in the decays of Bs0 mesons (a particle made of b and s quarks). The breaking of CP symmetry can be observed in the breakdown Bs0 –> J / ψφ, where the first product decays into a pair of leptons. The parameters of this process are very well defined by theory, and signs of divergence from predictions could suggest the existence of New Physics. So far, studies of this decay have been carried out for processes in which para muons are formed in the final state. Varvara Batozskaya and Konrad Klimaszewski in their work investigated the decay of Bs0 with a final state containing a pair of electrons. The difficulty of this task Was the occurrence of distortions caused by the braking radiation emitted by the interaction of electrons with matter (Brehmsstralung). 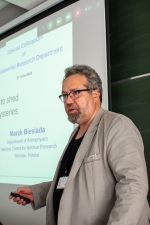 – prof. PhD. Marek Biesiada for proposing a new method of dark matter viscosity testing, the use of quasars in the standard candles method and studying the velocity distribution of early-type galaxies using gravitational lensing

By examining the occurrence of the damping effect of gravitational waves during their propagation through a dark matter fluid of non-zero viscosity, it is possible to study this viscosity. The assumption Was the efficiency of self-scattering of dark matter enabling the use of a hydrodynamic model. The research results indicate the possibility of detecting the self-interaction of dark matter on the galactic scale and galaxy clusters by ground-based observatories.

The quasar’s accretion disk radiates in ultraviolet. UV photons pass through the hot corona where free electrons have very high kinetic energies. They interact with electrons and take energy from them: UV photons become X photons. The relationship between the radiation powers in UV and X is non-linear, but can be described by a mathematical model. Based on a sample of 2421 quasars, prof. Biesiada and co-authors have shown that the correlation of UV-X brightness is strongly related to cosmological distances. Since quasars are also observed on the distances of the applicability of the standard supernova Ia method, we can measure the distance to them using two methods: SN Ia and the new one. This calibrates the quasar method and leads to a new type of standard ruler.

Gravitational lensing allows you to study the distribution of the velocity dispersion function (VDF) in early-type galaxies (ETGs) and measure the evolution of such galaxies. The study carried out a statistical analysis of ETG-type galaxies that are gravitational lenses, thanks to which a decrease in the density of lenses and an increase in their velocity dispersion were detected. These results were consistent with the predictions of the ΛCDM (Lambda cold dark matter) model. 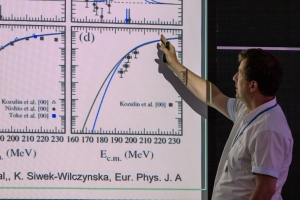 In the work of prof. Michał Kowal, prof. Janusz Skalski and PhD. Piotr Jachimowicz, the properties of 1305 heavy and super-heavy nuclei with the mass number Z = 98-126 and the number of neutrons N = 134-192 were determined and described. For these nuclei, the values ​​of the ground state energy, mass, shape of the saddle point, as well as the height of the fission barrier, separation energy and decay energy α (Qα) were determined. The used microscopic-macroscopic model with modified Woods-Saxon potential used the parameters previously adopted for the adjustment of the masses of heavy even-even nuclei. The significance of the obtained results is not limited to the experiments aimed at generating new nuclides. Knowledge of the parameters set by the authors may also be important for other areas of research. Among other things, properties for nuclei from the actinide group, important from the point of view of reactor physics, have been determined. Parameters determined and given in the study can also be used in astrophysical analyzes and predictions of nucleosynthesis at particular stages of the universe’s evolution.

Katarzyna Małek, as a member of the editorial board of the University of Warsaw magazine „Delta”, is the author of articles devoted to the discoveries of modern astronomy and astrophysics. In her texts, she introduced the audience to the subject of water on the moon, the „extinction” of galaxies, radio astronomy and exoplanets. This type of popularization activity drew attention to the importance of storytelling about scientific achievements in simple and understandable language, so that specialized information could also reach a wide audience.

We sincerely congratulate all the winners on their achievements and wish them continued success in their scientific work!