HELP – a modern and standardized catalog of extra-galactic objects 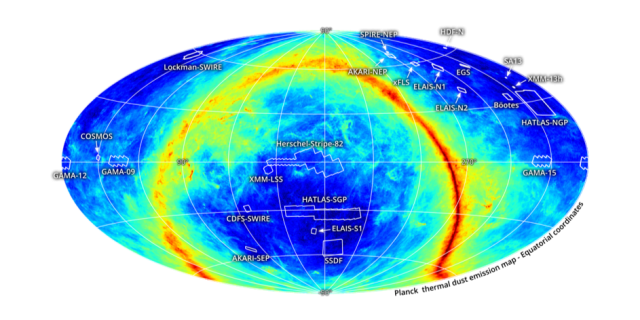 An international team of scientists has provided scientists and enthusiasts with the most complete catalog of extragalactic objects to date, covering an area of ​​over 3% of the full angle of the sky’s solid and containing 170 million sources. The modeling of their energy spectra was the responsibility of Ph. D. Katarzyna Małek from the NCBJ Astrophysics Department.

Thanks to the cooperation of scientists from many world institutes, including Polish astrophysicists from NCBJ, a wide-range catalog of extra-galactic objects HELP, the Herschel Extragalactic Legacy Project, was created. This catalog covers an area of ​​approximately 1300 deg2 of the sky (a total of 23 well-defined and studied areas of the sky, such as the Cosmological Evolution Survey, COSMOS). It contains 170 million sources for which photometric data has been collected, grouped and unified from a wide spectral range of the electromagnetic wave, from the optical part of the spectrum, and even ultraviolet to far infrared. Along with the catalog, the authors provide convenient data access tools and software enabling efficient analysis of this huge catalog. The catalog is also available through Virtual Observatory (VO) tools. Thanks to this, objects cataloged in HELP are conveniently available for analysis by the user almost immediately.

The first edition of the catalog – DR1 is now available to the public, and the collected objects, in addition to photometric data, along with the far infrared from Herschel SPIRE, contain the calculated values ​​of the photometric redshift and their physical parameters, such as stellar mass, the rate of star formation in the galaxy whether the total brightness of a galaxy in infrared. The parameters were estimated on the basis of modeling spectral energy distributions. Undoubtedly, HELP is a project that will help many scientists to statistically analyze galaxies spread over the entire sky. As the only such large catalog that collects complete publicly available photometric data, it is a great laboratory for studying the universe in the early stages of its evolution. At the same time, this huge catalog contains very unique objects, very rarely found in the universe. It was during the analysis of data from HELP that the project’s authors discovered a super-massive black hole in the galaxy, existing 1.4 billion years after the Big Bang. The HELP directory was also used as the base directory for observations of the international Low Frequency Aray project LOFAR. The authors plan to update the catalog with new observational data, when the need arises. At the same time, they also publish the necessary software to create such a directory on their own. All programs and data used in the project are publicly available under an open source license.

The head of the HELP project is professor Seb Oliver from the University of Sussex, and the Polish representative is Ph. D. Katarzyna Małek from the National Centre for Nuclear Research in Świerk. „In the HELP project, I am the team leader responsible for estimating the physical parameters of all 170 million published galaxies,” says Katarzyna Małek. „My main task was to model their energy spectra. Currently, after publishing the catalog, together with a team of doctoral students of NCBJ and IChTJ doctoral schools, Mahmoud Hamed and Gabriel Riccio, we are investigating the properties of highly infrared emitting galaxies in the HELP catalog. "

The project was financed by the Executive Agency of the European Research Council under the program of multi-partner research projects under the FP7–SPACE-2013-1 607254 contract. Polish research on the properties of observed galaxies, in particular on the physics of dust suppression in galaxies, is financed by Centrum Nauki, as part of the ASTROdust project, contract number: 2018/30/E/ST9/00082.