The LHC enters its next startup phase after Long Shutdown 2 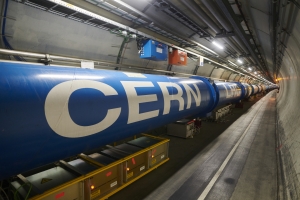 For several months, scientists from CERN have been preparing the accelerator complex located there for awakening. After more than 3 years, the so-called Long Shutdown 2 and the successive testing of subsequent acceleration steps, the first proton beam has already appeared in the LHC ring.

On April 22, at 12.16 CEST, after more than 3 years of maintenance and modernization work, proton beams with 450 GeV energies circulating in opposite directions in the LHC accelerator appeared. In the coming months, the last elements of the accelerator complex will be checked, and the energy and intensity of the beams will be constantly increased until the assumed values ​​of 13.6 TeV for a proton-proton collision are reached (compared to the current value of 13 TeV for such a collision).

During Long Shutdown 2, all accelerators involved in particle acceleration were modernized (for example, the LINAC2 accelerator Was replaced with the new LINAC4 linear accelerator, as reported here:https: //www. ncbj. gov. pl/aktualnosci/ramach-przygotowan-do-restartu-lhc-akceleratorze-linac4-pojawila-sie-pierwsza-wiazka), as well as detectors constituting elements of experiments at CERN. All improvements were made to prepare the complex to work with higher energies (increase from 6.5 TeV to 6.8 TeV per particle in the case of protons), as well as higher intensity (increase from 1,2∙1011 to 1,8∙1011 protons on the so-called „bunch” in 2023). The new equipment for experiments will allow the collection of much more data that will be used to conduct new analyzes, such as a thorough study of the properties of the Higgs boson or new, more rigorous tests of the Standard Model. What’s more, new experiments will be launched during Run 3, including FASER, one of the originators of which Was PhD. Sebastian Trojanowski from the NCBJ Department of Theoretical Physics (more information on this topic here:https: //www. ncbj. gov. pl/aktualnosci/faser-nowy-eksperyment-lhc-mocnym-naszym-akcentem).

The 27 km long Large Hadron Collider (LHC) is the final leg of the particle beam’s journey. Before protons or heavy ions appear in it, they must be accelerated by the remaining elements of the accelerator complex. Their path begins in linear accelerators, LINAC3 and LINAC4 (accelerating heavy ions and protons, respectively), from where they go to subsequent circular accelerators – PSB (Proton Synchrotron Booster), PS (Proton Sychrotron) and SPS (Super Proton Synchrotron) synchrotrons. At each stage, more and more energy is imparted to the particles. The final step of acceleration takes place in the LHC ring itself, where the particles are also collided at four points where the great experiments are: ALICE, ATLAS, CMS and LHCb.

Beam tests at the LHC accelerator are expected to last until mid-June, when the start of stable operation and collection of data from collisions is planned. At the same time, on July 4, Higgs@10 will be celebrated, the 10th anniversary of the discovery of the Higgs boson. Run 3 is expected to run until 2026, followed by Long Shutdown 3, during which further improvements will be made.