Modernization of research infrastructure in Świerk 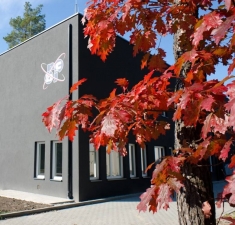 New labs and facilities developed within the just coming to the end 4LABy  project have greatly improved NCBJ research infrastructure. Outcomes of the project were presented on a special conference held on June 24.

During the conference NCBJ scientists presented outcomes of the Development of Ionizing Radiation-Based Technologies in NCBJ Świerk (a.k.a. “4LABy”) project just coming to the end after five years of accomplishment. Nearly 40 million PLN worth project made possible to erect a brand new building for modern labs, to overhaul some older labs, and to purchase some specialized R&D equipment. Modernised labs will provide preconditions to make scientific discoveries of the 21st century. Labs equipped with some state-of-the-art apparatus will make possible to conduct high-quality R&D works in such future-oriented fields as plasma physics, applications of plasma techniques in material science & engineering, radiographic defectoscopy, charge particle accelerators for medicine.

Accelerating Structures Lab is the single largest development accomplished within the 4LABy project. More than 50 specialists will soon move in to a brand new building of floor area of about 1400 square metres erected for the cost of almost 8 million PLN. They will be designing, developing and testing electronic circuitry, mechanical components, and control systems of modern electron accelerators for medicine. Two new mighty vaults for testing new designs have walls of thickness up to 3 m. Such shields provide radiation protection safety at all energies up to 20 MeV. The Lab equipment necessary to develop accelerators includes microwave measurement stands, Faraday cage with high voltage modulator, vacuum processing stands with leak detectors, modern micro-plasma welder, vacuum soldering oven etc. The nearly 2 million PLN worth oven (financed from the 4LABy budget) guarantees the highest quality of soldered junctions made within it. Microwave resonating cavities will be precisely tuned and accelerating structures will be finally assembled in some restricted-access high-cleanliness labs. Works on a sophisticated system for intra-operative radiotherapy to irradiate cavities left over after breast cancer surgery are to be finalized in the new Lab.

No modern lab may properly function without IT infrastructure capable to quickly carry out advanced computer simulations and to process large-volume streams of measurement data with adequate efficiency. Servers located in a room designed as a dedicated server room will be responsible for accomplishment of such tasks in Accelerating Structures Lab.

Thanks to the 4LABy project some new possibilities in research on charged particles accelerated in hot plasmas have been opened up in Plasma/Ion Beam Technology Lab. This direction of development of accelerator technology is considered a very promising one. Availability of a modern high-current pulse ion implanter (gun) has greatly expanded capabilities in that research field. The modernized gun is capable to fully cooperate with a brand new vacuum chamber. Materials may now be processed in two subsequent phases carried out in the same vacuum (implantation of some doping ions into near-surface layers followed by annealing of the implanted samples using some electron beams), so the risk of sample contamination is greatly limited. Advanced processing of materials with the help of plasma/ion guns is currently among the most modern and universal technologies applied in material science. Plasma-based methods are used by scientists in Świerk to produce (among others) high-temperature superconducting layers and manganese/silicon/germanium/tin oxide-doped semiconductors. The latter semiconductors are considered key materials for spintronics (which has potential to replace electronics in the future).

Mobile Environmental Analyses Lab is an unique vehicle built and equipped for about 2 million PLN within the 4LABy project framework. It can transport to any desirable location precise equipment capable to monitor air quality. A modern weather station with 10-metres long telescope mast and an ultrasound wind sensor is an integral part of the Lab. Lab equipment includes some devices capable to autonomously and continually monitor concentration of nitrogen oxides (NO/NO2/NOx), carbon oxide (CO), and ozone (O3). However, Lab is specially profiled for automated measurements of particulate matter suspended in the atmosphere, including ultra fine particles of sizes on the order of a fraction of 1% of the human hair diameter; such tiny particles are most harmful for human health. Lab equipment is capable to measure concentrations and total weight of the particulate matter. The collected samples may be further processed to determine heavy metal content.

Mobile electron accelerator for Radiography Lab is another device developed with some financial support within the 4LABy project framework. The radiographic accelerator operates within the 4…6 MeV energy range, for which it is a relatively easy task to maintain radiation protection safety. The device is used on construction sites to detect hidden faults in bulk of small- and medium-sized constructional elements that are impossible or impractical to transport to Świerk for analysis. The elements may be irradiated with either electrons or X-rays. Depending on the needs, images may be collected on either traditional photographic plates, or else generated in real time using a modern digital array of electronic detectors.

„The 4LBY project is an important financing source for many of the changes recently implemented in Świerk. Since our Institute ­– the largest R&D institution in the country – has been poorly financed for many years, the margin for manoeuvres was very limited. However, now it is changing due to our intense efforts to acquire European Union funds” – points out Professor Grzegorz Wrochna, NCBJ Director General. – „We are successfully modernizing the Institute. New labs and facilities have been acquired. But infrastructure is not everything. We are also heavily investing in our staff, trying to offer more and more opportunities for R&D work and to attract more and more young people to this fascinating world of science. To-day NCBJ is a recognized R&D centre in the global scale and a key R&D centre within the CEE region. I am convinced that we shall be continuing our efforts not only to increase importance of Polish science and technology in the world, but also to develop practical solutions capable to substantially impact our everyday life”.

Accomplishment of the Development of Ionizing Radiation-Based Technologies in NCBJ Świerk (4LABy) project has significantly improved conditions for doing research. The 39,669,532.34 PLN worth project was co-financed by European Union from the European Regional Development Fund within the framework of the Regional Operational Programme for the Mazovia Voivodeship 2007-2013.