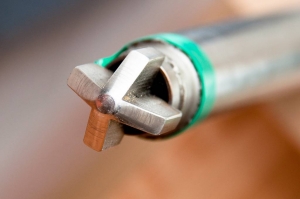 Currently large sources of fast neutrons are either at an early stage of construction (ESS) or in the design phase (IFMIF). Until they become operational, conversion of thermal neutrons from nuclear reactors into fast neutrons may turn out to be the most economic tech­nique capable to produce fast neutrons of energy 14 MeV. The pro­duced neutron flux density may be relatively high, above 109 cm-2 s-1. Just such converter has been designed and developed by NCBJ scien­tists. Good results obtained during 135 hours of continuous testing operation of the converter deployed inside MARIA confirm that currently it is one of the most intense continu­ous sources of 14 MeV neutrons (and a sole facility of its kind) ope­rated in the world. It will be used to irradiate various materials to test them as constructional materials needed for development of 4th generation nuclear reactors and/or thermonuclear facilities.

„The proposed lithium-deuterium converter was adapted to con­struction of the MARIA nuclear reactor used as a source of thermal neutrons” – explains Eng. Rafał Prokopowicz, PhD, from NCBJ Division of Research Reactor Technology – „Fast neutrons necessa­ry for material testing are produced in a two-stage nuclear reac­tion involving lithium-6 and deuterium nuclei. Within a volume of about 60 cm3 we have obtained more than 109 cm-2 s-1 neutrons of energy 14 MeV. Since the converter may work continually for many months, it is effectively among the most intense continuous sources of fast (14 MeV) neutrons operated in the world”.

Radiation resistance of each new candidate for a nuclear facility constructional material must be tested in radiation field of a spec­trum similar to that expected within the facility. Fast neutrons of energy about 14 MeV are major radiation components in future thermonuclear reactors. The 4th genera­tion nuclear reactors are to use fast neutrons as well.  To be able to test and qualify materials, a reliable, intense, continually-operated source of fast neutrons is just indispensable. The source should be best located close to a suitably equipped lab employing some properly qualified research staff. NCBJ is a sole such place in Poland and one of a few available in the world.

„Our converter is just an effect of a fruitful combination of competen­ces of Polish scientists with unique research infrastructure.” – points out Professor Grzegorz Wrochna, NCBJ Director General – „These days count of research reactors operated in Europe is insuffi­cient, therefore some quite new perspectives are opening up before our Institute. We hope that national and European means allocated to modernize the MARIA reactor and to retrofit our Material Testing Lab with some additional equipment will be sufficient to develop in Świerk an unique in the global scale research facility on new materials, including materials necessary to successfully develop 4th generation nuclear reactors and thermonuclear reactors”.

Thermonuclear power generation is based on nuclear fusion  reactions. When two very light nuclei combine into a single heavier one, a surplus of binding energy is liberated. The reaction in which nuclei of deuterium and tritium hydrogen isotopes merge into helium nuclei is most often considered for future applications. 80% of all energy liberated during the reaction is carried away by 14 MeV neutrons. The neutrons also produce new fuel (tritium). Despite un­questionable advantages of that scheme, fast neutrons pose a threat for typical constructional materials applied to build current generation of classical (fission) nuclear reactors. Therefore some new constructional materials resistant to corrosion at high tempera­tures, high fluxes of fast neutrons and not susceptible to neutron acti­vation need to be developed.

The JET tokamak is currently one of the major facilities used to study thermonuclear fusion. However, the W7-X stellerator developed in Greifswald is soon to be put into operation. Polish scientists and engineers actively participate in the developmental works in Greifswald. 6.5 million Euro worth in-kind contribution of the Polish partners in that international project was delivered on May 20, 2014. Institute of Nuclear Physics of the Polish Academy of Scien­ces was involved in assembly of superconducting cables/bus-bars. Contribution delivered by Warsaw University of Technology, Institute of Plasma Physics & Laser Micro-synthesis, and Opole University of Technology included structural & mechanical analyses of the facility magnetic subsystems and soft X-ray diagnostic subsystems. NCBJ has participated in the project since January 2011. Our 4.5 million Euro worth in-kind contribution included some elements of neutral beam injector, reflex magnets, hydraulically levelled supports of neutral beam injector chambers, gate valves together with annealing setups, and cooling subsystem.

Objective of the research on thermonuclear fusion conducted all over the world is to demonstrate feasibility of fusion nuclear reac­tions as an economic source of power on Earth. They should result in DEMO, a thermonuclear facility prototype. The decision whether to continue efforts aimed to develop the first commercial thermo­nu­clear power plant will be made depending on outcomes of the DEMO project.