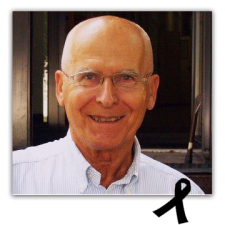 We worked together nearly 50 years. I’ve always been impressed by clarity of his lectures and how he tried to explain the tackled phenomena on some physical grounds. His works in the field of crystal lattice dynamics, crowned with the Drgania atomów w ciele stałym (Solid state atoms vibrations) monograph, are classical references to this very day. His scientific interests were initially focussed on problems caused by disorder within crystal and/or magnetic lattice. Over the years he became interested in some more universal problems. Ability to ask simple questions for which answers were by no means simple was among his distinctive features.

As a very respectful person Professor Czachor was elected Head of Department II in the former Institute of Nuclear Research (IBJ) in the first “Solidarity” trade union period. Those times were very unsettled with much political animosity among people. He tried to tranquillize those animosities not engaging himself into activity of the union (with which he sympathized), and that way significantly helped to maintain the high scientific profile of the Department.

Professor Czachor always strongly involved himself in political movements for freedom of the nation. As a 16-year old high school student he spent a few months in Lublin jail imprisoned for distribution of political flyers. That episode (for which he got a political veteran status) helped him to sensibly and very courageously support underground “Solidarity” during the martial law period in Poland: he was storing and distributing prohibited printed matter. Not many people knew of that involvement; I learned the truth from Professor Jerzy Przystawa, another friend of us who passed away two years ago. Imposition of the martial law changed much in curricula vitae of many people. However, as an Associate Professor he avoided expelling from IBJ transformed that time into three independent research institutes. In free Poland professor Czachor very actively involved himself in the Movement for Single Mandate Constituencies. He strongly believed the idea and was doing his utmost to propagate it: gave plenty of public speeches explaining why single mandate constituencies were so beneficial for the country, wrote/published much on the subject, and generally was a prominent Movement member.

Holder of a vast scientific knowledge was also unusually sensitive to words: he wrote poetry but did not boast about his poems. He was a deeply religious man but a very discreet about his religion. As a matter of fact he was generally very careful about privacy, did not talk much about himself.

During recent years he was regularly organizing in NCBJ civic courses on current social issues. His passionate belief in need for a civic attitude of every citizen manifested that way in spite that he and his activities were often misunderstood. Nearly every of our private conversations on general subjects was enlightening. He was often arguing how important was to undertake right actions even if they were almost surely ill-fated.

Professor Czachor was a scientifically and socially active wise man, top-class scientist, noble idealist. He deeply felt all the injustice brought about by the political system in Poland. He left a wife with whom he spent 55 years (excellent scientists, chemist), a very talented daughter, a brother, and a circle of friends which I was honoured to belong. I hope that memories of him will last among those with whom he worked as well as among friends. He deserved that with all his life.