TRISO fuel – fuel with its own „containment” 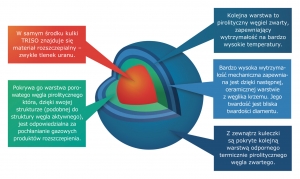 High-temperature reactors use modern TRISO (TRIstructural-ISOtropic) nuclear fuel. NCBJ scientists conducted preliminary tests of the resistance of fuel pellets „shields” to mechanical damage. The work is carried out in cooperation with the European Research Center (JRC).

TRISO fuel is the main attribute and advantage of HTR reactors. It uses uranium oxide or carbide as nuclear fuel. The fissile material is surrounded by four cover layers. The use of layers of „shields” – pyrolytic carbon * and diamond-hard silicon carbide (also called carborundum) as the building material – makes fuel pellets the size of a poppy seed extremely resistant to mechanical and chemical damage. TRISO cover layers are also very thermally resistant (up to 1700°C). This allows to maintain the temperature of the reactor core – around 1100°C and to generate heat at the „outlet” of the reactor up to 700-800°C. This is a unique feature of this reactor: the obtained heat meets the needs of many industries, e. g. chemical industry, petrochemical industry, paper industry, etc.

TRISO cover layers are resistant to neutron beam irradiation, corrosion and oxidation. Currently, research on their durability is also underway. The presence of covering layers in the TRISO molecule allows to keep tightly all radioactive uranium fission products not only during the reactor’s operation, but also long after its operation. In short, the TRISO fuel used is safe to be disposed of as waste. However, to be sure about the correct parameters of TRISO molecules obtained in a given production technology, from a given supplier or in a specific batch, it is advisable to carry out appropriate control tests.

Scientists from NCBJ conducted an experiment of the failure rate of TRISO fuel particles at the initial stage of the research, i. e. before placing them in the reactor core. The research Was carried out on replacement samples, the so-called p-TRISO; unlike real fuel, they do not contain uranium. Made of zirconium dioxide, the TRISO core is surrounded by covering layers. Researchers tested the resistance of the TRISO ball to internal mechanical damage. In order to determine the state of individual layers of p-TRISO particles, scientists prepared their cross-sections, cutting the hemispheres. Two polishing methods were used for this purpose: standard – mechanical and ionic – proposed by the authors. In the first method, sandpaper of increasing grain size is used. The ion method is based on „bombarding” the ball with a stream of ions. An appropriate mask is used, which protects half of the p-TRISO sphere, and a stream of argon ions hits the other hemisphere. In both cases, the hemisphere remains at the end, giving access to the cross-section. The samples prepared in this way were subjected to many microscopic examinations, including the Scanning Electron Microscope (SEM), Raman spectroscopy and confocal material microscopy.

„Analyzes have shown that mechanical polishing leads to contamination of one of the protective layers – the porous buffer layer closest to the core” – says MSc. Zuzanna Krajewska, PhD student at the NCBJ Department of Nuclear Energy and Environmental Analyzes. „The use of mechanical polishing spreads the polished material over the surface of the layer, which results in its smoothing. On the other hand, the ionic method does not affect the structure of the p-TRISO layers, thus it is less invasive than the mechanical method”. 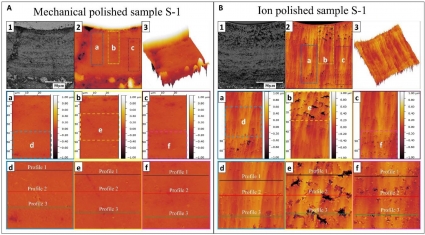 Scientists report that their proposed ionic method of polishing fuel particles, apart from the lack of interference with the material, has additional advantages supporting its use. Among other things, the possibility of using constant parameters, repeatability of results, or shorter time of research. However, the most important argument in favor of using this method is the lack of contamination of the structure of the buffer layer after its application. The buffer layer closest to the nucleus, characterized by a porous structure, is used to mechanically separate the nucleus from the successive covering layers. Therefore, it is important that the structure of this critical layer remains intact in the further stages of the study.

„We conducted preliminary tests on replacement beads, the so-called p-TRISO, which do not contain uranium „– informs MSc. Krajewska. „The first 100 grams of TRISO proper fuel is currently on its way to NCBJ with JRC Petten as part of our European partnership. In the coming years, we will conduct very comprehensive research on this fuel at NCBJ in order to ensure optimal and safe operation of the HTR research reactor. „

Further research on samples obtained with the innovative ion polishing method will be continued in the coming months.

„TRISO fuel will also enable the use of thorium as a fertile material in HTR reactors in the future, i. e. the thorium can be effectively converted into nuclear fuel through the reaction of capturing neutrons inside the TRISO molecule” – emphasizes Prof. Wacław Gudowski from the NCBJ Department of Nuclear Energy and Environmental Analysis, co-author of the publication. „This is a fantastic prospect of a duplicating reactor without reworking the fuel used. „

NCBJ is a partner of the European Joint Research Center (JRC), and the facility in Petten is one of its research laboratories.

Description of the illustration (Fig. 7 from the discussed work)

The results of roughness measurements of the sample polished with the mechanical method (Figure A) and the sample polished with the ionic method (Figure B). The figure shows: microscopic images of a selected area of ​​the buffer layer, obtained with the SEM (images No. 1) and visualization of this area using a confocal material microscope – with the „a”, „b”, „c” regions marked (images No. 2). The 3D images (images No. 3) show the roughness of the selected surface. From the regions (a-c) marked in pictures no. 2, three areas were selected for further research (d-f). The above pictures show the differences in the structure of the layer between the mechanical polisher – it is not preserved, and the ionic – porous surface intact.