Images of distant galaxies, distorted by powerful gravitational lenses, are visually the most out-of-the-box phenomena photographed by telescopes. Their automatic detection is difficult for many reasons. During the international workshop in Warsaw, dedicated to machine learning, scientists from the National Center for Nuclear Research demonstrated theoretical models and software that deal with this task with high efficiency and reliability. 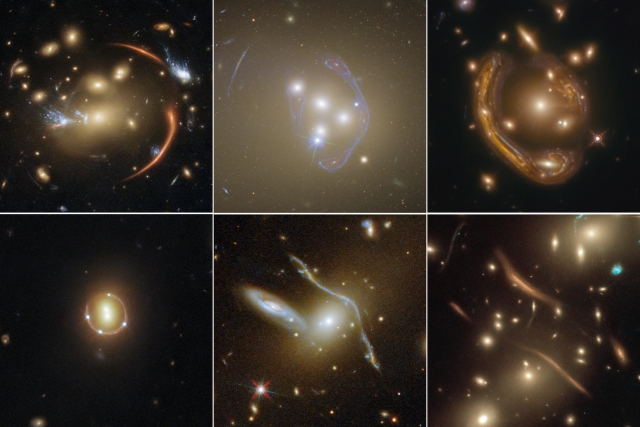 In the coming years, astronomers expect the influx of a huge number of photos, mainly from large-scale sky surveys. Abundant observational material gives hope for groundbreaking discoveries, but requires the development of automated image analysis tools capable of reliably classifying astronomical objects captured in photographs. The National Center for Nuclear Research (NCBJ) has already made a contribution in this field: scientists from Świerk have created and tested a set of models built on neural networks and trained to detect strong gravitational lenses. The achievement Was presented, among others, at the WMLQ 2022 (International Workshop on Machine Learning and Quantum Computing Applications in Medicine and Physics) co-organized by NCBJ, dedicated to improving machine learning methods and their applications in physics and medicine.

„Strong gravitational lensing is so difficult to see that until five years ago, we only knew a few hundred cases in the entire cosmos,” says PhD student Hareesh Thuruthipilly (NCBJ), first author of a paper in the scientific journal Astronomy & Astrophysics. „Photographs from the sky surveys that are just beginning should increase this number to hundreds of thousands within a decade. However, there is a condition: tools that will optimize the work of astronomers must be developed. We demonstrate that our theoretical models and software are already capable of reliably detecting candidates for strong gravity lenses."

Gravitational lenses are a consequence of general relativity, in which mass is one of the physical quantities capable of curving space-time. The paths of photon motion, rectilinear in flat space-time, bend in space-time around a large mass, which gives the observer the impression that they came from slightly different directions than the original one.

An ordinary focusing lens deflects a light ray the farther it is from its optical axis. A gravitational lens works differently: the deflection of the light beam is greater the closer it is to the center of the lens. This feature causes the images of lensed objects to blur into more or less bent streaks. In the optimal setting, when, from the viewer’s point of view, the lens focuses light rays passing through it on all sides, the image of the lensed object will be stretched into a circle called the Einstein’s ring. The influence of low-mass objects on the shape of space-time is negligible. However, when a galaxy with a mass of many billions of solar masses becomes the lensing object, spectacular views can be expected. However, in practice, detection is so difficult, that the first gravitationally lensed object Was not spotted until 1979.

„Only one massive galaxy in ten thousand creates images of lensing,” shows the scale of the challenges Thuruthipilly, MSc. „The shapes of these pictures are unusual, and the long distance makes the photos small and not the best brightness. Moreover, in the overwhelming number of cases, the orientation of the lensing galaxy and the object behind it is suboptimal, and only bits of streak can be seen. As if the problems weren’t enough, sometimes not one galaxy is involved in lensing, but several galaxies, which results in additional image distortions."

In order to determine the optimal methods for the detection of gravity lenses, the NCBJ team prepared five models built on relatively simple neural (convolutional) networks and 21 models operating on more complex networks (with a self-attention mechanism). Each model Was trained separately on 18,000 images of simulated gravity lenses. Ultimately, the effectiveness of the network Was checked on computer-generated one hundred thousand photos from the Bologna Lens Challenge database, to make it difficult to supplement with actual photos from the Kilo Degree Survey (KiDS).

„Self-attentive neural networks did much better” – says PhD Adam Zadrożny from the NCBJ Astrophysics Department. „With just three million parameters, they achieved results comparable to those of convolutional networks with 23 million parameters. Identification of the candidates Was correct in more than nine out of ten cases. The results of our work therefore suggest that when it comes to detecting powerful gravitational lenses, the future belongs to self-attentive models."

Detecting a large number of strong gravitational lenses is important in determining the applicability of general relativity and in studying the evolution of the universe. Currently, a small number of such lenses does not allow them to be used to estimate the values ​​of the most important parameters calibrating modern cosmological models. However, if automated detection methods qualitatively expand the pool of known lenses, a new source of information will open up for cosmologists.

The WMLQ 2022 (International Workshop on Machine Learning and Quantum Computing Applications in Medicine and Physics) workshops are dedicated to issues related to machine learning and quantum computing and the possibilities of their use in physics and medicine. The workshops are held in Warsaw from 13 to 16 September at the seat of the Polish Chamber of Commerce. The event is organized by the National Center for Nuclear Research in cooperation with scientists from the Jagiellonian University and the University of Vienna. More information: https: //events. ncbj. gov. pl/event/141/

Photo 1. Examples of strong gravitational lenses photographed by the Hubble telescope. In the lower left year there is a clear Einstein ring. (Sources: Hubble / NASA / ESA)