Award for a method of localizing places of dangerous substances release 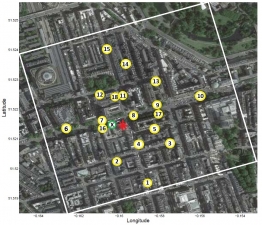 Piotr Kopka, MSc, from the MANHAZ Centre for Hazard Analysis, operating in National Centre for Nuclear Research, received the second prize for young scientists  from the whole world (NERIS Young Scientist Award)  on the yearly conference of NERIS European scientific platform (European platform on preparedness for nuclear and radiological emergency response and recovery) in the DTU institute (Center For Nuclear Technology DTU) in Roskilde in Denmark. The distinction has been awarded for presentation titled: “Identification of atmospheric contamination source in an urban area by approximate bayesian computation methodology” prepared by Piotr Kopka and Anna Wawrzyńczak.

Research presented in Roskilde by Kopka, MSc, were related to the scenario of a potential gas leakage in a city particularly in danger of terrorist attack or accidental release of dangerous substances. Quick detection and localisation of such event is crucial for health and life of the citizens. This is why a concept of creating networks of detectors recording the concentration of specific gases and radiation levels is considered in highly populated agglomerations – places of high risk. Unfortunately, especially in large areas of risk, it is impossible to build a dense network of detectors. These areas are in need of methods of reconstructing information about the place and course of a dangerous event based on reading from a limited amount of disperse control points.

Facing the problem of quick reconstruction of release scenario based on fragmented data, Piotr Kopka, implemented the well-known ABC algorithm (abbreviation of  “approximate bayesian computation”), which was yet to be used in issues like this one. “Implementation of the algorithm was possible thanks to appropriate modelling of both the substance’s spread phenomena and environmental conditions, which have an impact on this process” – explains Kopka. “The tool that we developed can quickly – or even almost in real time, using suitable computing power – determine the fact of dangerous substance release, precise probability map showing the place of release, time of release, duration of the release, as well as the amount of released substance. Of course, all of this is possible only with the data from the network of detectors.”

The tool prepared at MANHAZ Centre has been evaluated with real data acquired several years ago during a series of experiments conducted in London. The experiments were conducted under the DAPPLE project (http://www.dapple.org.uk/index/html) and they consisted of controlled technical gas release (it was harmless for humans and the environment) in the central part of the city, which was suited with a network of 18 detectors. The results obtained by Piotr Kopka correspond very well with the real process of release and further propagation.

“Centre for Hazard Analyses MANHAZ, working as a research team of NCBJ, specialises in analyses of hazardous events – related to either radiation or chemistry” – say Sławomir Potempski, PhD, leader of the team. “Mr. Piotr Kopka is now preparing to analyse similar issues on a continental scale. This relates to the high-profile issue from a few years back, when almost all detection stations across Europe spotted trace amounts of radioactive ruthenium isotope. To this day there is no official statement about the origin of this isotope in the atmosphere. We hope, that the presented method will cast a new light on this topic.”

The tool, after some supplementation, could be used in a future not only to localise and evaluate the hazard, but also to predict further development of the situation. It is important especially in taking appropriate protective and rescue actions. Effective analysis requires not only a network of detectors, but also enough computing power available when needed. Utilising appropriate computing resources allows for a swift acquisition of valuable data. Mr Kopka’s calculations were conducted I the Świerk Computing Centre (CIŚ), which specialises in such topics, among other things.

The presented results were published in prestigious Atmospheric Environment journal and Piotr Kopka, MSc, will be already defending his doctoral dissertation in May.