CANIS is the laureate of the TERAZ POLSKA competition 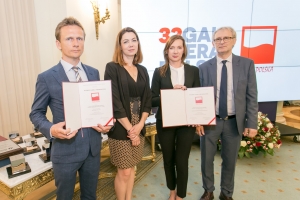 The system for non-invasive inspection of large-size goods CANIS, a joint work of PID Polska and the NCBJ Nuclear Apparatus Department, Was this year’s winner of the Teraz Polska emblem in the innovation category. In Świerk, among others, the heart of the device, i. e. the accelerator being the source of the gamma ray scanning beam. Today, at the ceremony at the Presidential Palace, Agata Kornhauser-Duda presented the representatives of our institutions with the diploma and the statuette of the emblem.

In the 32nd edition of the Teraz Polska competition, 23 products, services and innovations were awarded this year. One of the three awarded innovations is the Polish MultiControl CANIS load control system – a radiographic device for scanning large-size loads with a high-energy X-ray beam. This solution is unique on a global scale as it allows for efficient and simultaneous scanning of goods of various densities. Constructed and built at the NCBJ Nuclear Apparatus Department, a dual-energy accelerator dedicated to the MultiControl CANIS system enables smooth real-time beam energy change in the full energy range, i. e. from 2 MeV to 9 MeV. Thanks to this, it is possible to scan loads of different densities, such as: polyurethane foam, plastics or polymer composites, which are characterized by low density, as well as objects of high density, such as: non-ferrous metals, steel or blocks of special reinforced concrete. The solution enables the control of the load in a non-invasive, quick and precise way. Border control services – and others – receive an invaluable tool to detect undeclared goods, contraband, weapons and works of art. MultiControl CANIS enables the inspection of cargo, railway wagons and large-size vehicles. CANIS is currently the main product of MultiControl. The company’s offer includes both a version of a modular crane system (so-called gantry) for the control of vehicles at border crossings and cargo containers, as well as a stationary system for the control of railway carriages. 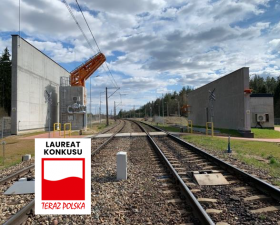 The MultiControl CANIS system uses advanced technologies based on native accelerator technology for its construction. The radiation source is a high-energy linear accelerator with double energy in the 2 to 9 MeV range. The smooth energy regulation in the full working range, developed by scientists from NCBJ, enables precise operation regardless of the density of the scanned goods. This type of solution makes it possible to match the energy to the scanned object and is a significant advantage of the system compared to competitive products offered on global markets. In addition, the accelerator beam, changing the energy with a frequency of up to 1000 Hz, allows you to capture the smallest detail in the analyzed image. High image quality is also a solution based on precise scintillators and linear detectors. The entire system individually tailored to the customer’s needs takes into account the latest solutions that are being developed on an ongoing basis by NCBJ scientists in cooperation with the company. Acceleration of image interpretation through pre-processing or control of the radiation source through the user panel using the auto-calibration process and beam angle adjustment are just some of the solutions used in the MultiControl CANIS system.

When designing the system, the creators used the help of the Polish customs services, making use of the submitted comments and trying to find solutions best suited to real needs. The MultiControl CANIS system has been operating for two years at the railway border crossing at the external border of the European Union in Kuźnica Białostocka. During this time, it has repeatedly proved its usefulness by detecting, for example, attempts to smuggle cigarettes hidden in coal wagons.

The employees of the Department of Nuclear Apparatus and the Department of Physics and Particle Acceleration Techniques participated in the design and construction of the CANIS scanner. A solution patented by NCBJ scientists was also used.

THE PRESIDENT OF THE REPUBLIC OF POLAND

Director of the National Center for Nuclear Research

I sincerely congratulate you on the prestigious title of the Laureate of the „Teraz Polska” Competition. This is a significant success, which is a testimony to your achievements. The „Teraz Polska” promotional emblem is awarded to the best products, services and innovations on the Polish market. You belong to the group of leaders in Polish development.

Your path to success required consistent work and perseverance, daring vision and creativity. It is to such ambitious undertakings that Poland owes its economic and civilization achievements. The economic patriotism of Polish entrepreneurs, inventors and innovators is a source of energy that multiplies the prosperity and prosperity of the Republic of Poland.

The slogan „Teraz Polska” has an inspiring but obliging meaning. On the one hand, it is the freedom and freedom of management as an opportunity for the fullest use of Polish talents and skills, and on the other – a reminder of the challenges we still face in the modern world. Especially now, when as a result of the pandemic and the war in Ukraine, the existing supply and production chains are destabilized and the global economic system is changing, the strengthening of Polish competitiveness and increasing the recognition of Polish brands and our expansion into global markets is a condition for our country to play a subjective role in the international space.

I am glad that in Poland economic activity is more and more commonly associated with social sensitivity. Just as Polish companies have made a great contribution to the fight against the coronavirus and overcoming the crisis situation related to the pandemic, now they provide enormous support to war refugees from Ukraine, brutally attacked by Russian aggressors. To you, as leaders of Polish business and research serving development, I would like to express my heartfelt thanks for your dedication and solidarity to our Ukrainian neighbors who are experiencing the tragedy of our Ukrainian neighbors.

Once again, congratulations on your honorable laurel. In expressing my appreciation, I wish you further great achievements, fulfillment of your plans and all the best. I cordially greet you.

PID Polska Sp. z o. oas a company with many years of experience in the technology related to the creation and analysis of X-ray images, it Was selected by the National Center for Nuclear Research (NCBJ) and PricewaterhouseCoopers (PwC) in the Bridge Alfa project (NCBiR), to cooperate in the commercialization of the CANIS system developed at NCBJ. It Was created as part of the project POIG. 01.01.02-14-012 / 08 implemented by NCBJ in 2008-2014 entitled: „Development of specialized systems using accelerators and ionizing radiation detectors for medical therapy and detection of hazardous materials and toxic waste”. Commercialization of the results of the aforementioned project led to the signing of a cooperation agreement between NCBJ and PID POLSKA in 2016. Under the agreement, PID Polska is the only recipient of the developed technology dedicated to the security sector. The task of PID Polska is to introduce this solution to the commercial market. In order to maintain product transparency and uniformity of the target market, the CANIS system Was transferred to a special purpose vehicle called MultiControl. The company MultiControl and PID Polska belong to the joint stock company MTG, which means that the product remains in the same capital group. The cooperation between business and science, supported by a framework agreement that has been in use until today, has led to the further development of the system.

Department of Nuclear Apparatus NCBJ (ZdAJ) for over 40 years it has been producing radiographic and medical accelerators for domestic and foreign recipients as well as other specialized devices related to nuclear technologies and radiation. Over 100 highly qualified ZdAJ employees work closely with the NCBJ research part, improving existing and developing new products. The plant has technological facilities and its own modern production hall and rooms necessary to work with devices generating ionizing radiation. Thanks to this, it can offer a wide range of services with the use of modern infrastructure. ZdAJ created, inter alia, key components of the Linac 4 accelerator, the first stage of particle acceleration in the CERN accelerator complex feeding the Large Hadron Collider LHC. The most important products and studies of the Department include among others LYLLYPUT radiographic accelerators and the AQURE accelerator created together with the Greater Poland Cancer Center, intended for intraoperative therapy.