COSMO-15: Is physics soon going to exceed its boundaries – just to immediately set some new ones? 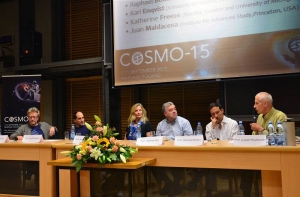 The COSMO-15 international conference held in Warsaw University Old Library Building came to end. World-class cosmologists discussed fundamental issues related to origin, early evolution, and current structure of our Universe. Majority of the experts agreed that a breakthrough in investigations on dark matter is just around the corner.

The COSMO-15 conference held in Warsaw between September 7 and 11, 2015 has attracted physicists, astrophysicists and cosmologists from the entire world. 154 attendees came from Europe (including 44 from UK, 33 from Poland and 17 from Germany), 112 from Asia, 27 from North America, 8 from South America, and 4 from Australia.

Sessions held on Monday and Tuesday were devoted to observational aspects of cosmology, astrophysics  of particles (including neutrinos), and dark matter. Chances that neutralinos, hypothetical heavy elementary particles known also as WIMPs of which dark matter may be composed of are discovered were discussed in a series of lectures. Some experimental data reported during the conference seem to indicate that dark matter first signs might even be already observed, but the reports need to be confirmed. Greatest physicists’ hopes are vested in the new generation single-tone detectors, such as XENON1Tcurrently under construction in Gran Sasso close to Rome. That detector is expected to commence regular operations in a few coming months. Theoreticians hope to register neutralinos for the first time within two years (provided they do exist).

Thursday session discussions (continued on Friday) on early stages of Universe evolution just after the Big Bang evoked great interest of Conference attendees. Cosmological models predicting an inflation stage (an extremely short stage during which space-time expanded many orders of magnitude faster that currently) play a substantial role in these studies. Such models have been greatly refined and some approaches that are matching observables better than some others may be indicated.

Black holes turned out particularly inspiring.  And they were not black holes ob­served in the Universe but rather some abstract mathematical constructs emerging from theories of multi-strings and their expanded versions. Many physicists are con­vin­ced that better understanding of mathematical foundations of such objects will make possible to develop in the future some theories capable to describe not only evolution of the Universe just after the Big Bang, but perhaps the Big Bang itself.

„We are perfectly aware that intellectual work to be done by theoreticians is gigantic, exceptionally difficult; it must deal with just foundations of any future cosmological theory. Effects will not appear right away; may be it will take 10 years, may be 50, who knows whether not 100 years. It is really a work at the grassroots, which however must be undertaken if genesis of our Universe is to be understood” said Professor Leszek Roszkowski from NCBJ in Świerk, Chairman of the COSMO-15 Conference Organizational Committee and Scientific Committee.

Difficulties in experimental falsification of  new, ever more refined cosmological theories have put scientists in extremely difficult situation. Is a theory which cannot be confirmed because of some technological restrictions still a science? Is it a theory which seemingly cannot be verified on fundamental grounds? Such topics were discussed during the Thursday night open debate with participation of some world-class professors including Stephen Barr (Bartol Institute, University of Delaware), Raphael Bousso (University of Berkeley), Kari Enqvist (University of Helsinki), Katherine Freese (Nordita, Sweden/University of Michigan) and Juan Maldacena (Institute for Advanced Studies, Princeton University). The debate was moderated by Professor Leszek Roszkowski from NCBJ. The debaters identified discoveries of the largest  significance for the development of cosmology, including fluctuations of the microwave cosmic background radiation observed by the COBE satellite, acceleration of Universe expansion, indirect evidence for dark matter. They pointed out that until recently our Universe was considered a scientifically uninteresting single galaxy, invariable, empty and cold. That all changed in 20th century, when one breakthrough was appearing just after another. Our Universe came to life and turned out to be (scientifically) extremely interesting during just last century.

Some theories proposed these days suggest that our Universe may be just a tiny fragment of a much larger Multiverse, individual parts of which may have physical constants of different values, or even follow different laws of physics. Such multiverse parts could not be verified neither by observations nor by experiments. However, the debaters have pointed out that history of science knows many situations, in which new theories led to some seemingly unverifiable hypotheses, later successfully falsified. Both theories of relativity proposed by Albert Einstein may be the best example. Even assumptions accepted to formulate some theories are often unverifiable, for example we cannot verify whether gravitational or electromagnetic field is really present in every point of our Universe.

Professor Maldacena has pointed out that the currently discussed cosmological theories are just too primitive to describe well the Universe. Professor Bousso has noticed that a theory may be verified indirectly, for example multiverse theories specify some predictions concerning our Universe and in that respect they might be falsifiable in the future. Professor Enqvist has reminded that not so far ago even the most prominent scholars were of opinion that it was beyond mankind cognitive capabilities to explain planet movements.

„I think that the sciences always were and always will be experiment-driven. History has shown that new surprising results that strongly stimulate development often appear suddenly even in times, in which progress in research is seemingly slow. Boundaries of the sciences are set by our technological capabilities. We will be witnessing progress in science as long as technology will be advancing”  commented Professor Katherine Freese.

„Why are we talking about science limits? To be able to exceed them reasonably! Science is beautiful. It is also very important since it teaches us plenty of true things about the world. However, we cannot uncritically transform it into something it just is not. We have to remember that everything has its limits, science and its methodology is not any exception. Therefore I find thinking according to which science might eventually give answers to all questions a huge misunderstanding” said Professor Stephen Barr.

COSMO conferences have been organized since 1997. The first COSMO conference was organized in Ambleside (north-west corner of England, close to the English-Scottish border) by Professor Roszkowski (then at University of Lancaster). Famous attendants included Stephen Hawking (University of Cambrigde) and Andrei Linde (Stanford University). Both scientists are still members of the Conference Supervisory Committee, chaired from the beginning by Professor Roszkowski. Later editions of the Conference were organized in many leading research centres of the world, including CERN (Geneva), Chicago, Cambridge and Tokyo. Traditionally the conference returns to Europe every other year. This year the conference was for the first time organized in Poland.

NCBJ in Świerk was the main organizer of the COSMO-15 conference. Next year it will be organized in University of Michigan, Ann Arbor, USA.

With its about 1,000 employees, NCBJ is the largest research institute in Poland. It was set up in 2011 in effect of merging two Świerk-based Institutes: IPJ (the Andrzej Soltan Institute for Nuclear Studies) with IEA POLATOM (Institute of Atomic Energy). Its profile includes support for development of the first nuclear power plant in Poland, pure research in sub-atomic physics (elementary particle physics, nuclear physics, hot plasma physics etc.), practical applications of nuclear methods, manufacture of HiTech equipment for research, industry, and medicine. Scientists from Świerk participate in international programmes devoted to development of 4th generation nuclear reactors and thermonuclear fusion.