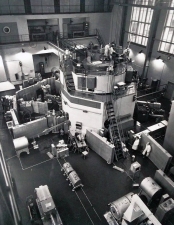 EWA is an acronym from Experimental Water Nuclear reactor in Polish. Its development became possible after the 1st Geneva Conference on peaceful applications of atomic energy (1955). Soviet Union offered to sell their research reactors to all countries of the Eastern Block. Suitable agreements were reached with Poland, Bulgaria, Czechoslovakia, East Germany, Romania and Hungary.

Construction works in Poland started in 1956 in Świerk. The reactor thermal power was 2 MW, thermal neutron flux 2x1013 neutrons/s٠cm2. Reactor core was housed inside an aluminium container filled up with water that cooled it down. Fully loaded reactor was powered by nearly 800 fuel rods, each containing 10% of U-235. 9 control/emergency rods were also placed inside the reactor core. 8 vertical channels close to the core were used to produce various radio-isotopes. 10 horizontal channels routed through the reactor shield were used to run physical experiments.

Polish engineers re-constructed EWA in 1964. New fuel enriched with U-235 to 36% and an added beryllium reflector allowed to double reactor power. A series of experiments run to find an optimal way of cooling the reactor down allowed in 1967 to boost reactor power up to 8 MW. In subsequent research some fuel rods were specially equipped with gauges dedicated to measure temperature and coolant flow at rated load of the reactor and/or in emergencies. Some experiments in which one, two or all three coolant pumps were suddenly turned off proved that EWA might be safely operated at power levels up to six time and neutron flux up to four times higher then originally designed (such experiments were unprecedented in the world scale). However, only 10 MW was finally accepted as EWA’s rated power, leaving 2 MW as an extra safety margin. EWA were operated on the average  3,500 hours each year continually until February 24, 1995, when a decision to shut it down was made in view of tear and wear of many of its elements and constructional materials. The de-commissioning process started in 1997. Before 2002 all nuclear fuel and highly active materials were removed and the structure was disassembled. To-day the building which was once occupied by EWA belongs to Radioactive Waste Management Enterprise, NCBJ’s neighbour in Świerk.

“The EWA research reactor introduced Poland into the era of nuclear power.” – points out Professor Grzegorz Wrochna, NCBJ Director General – “Experiments conducted at the reactor quickly built up our competences to an international level. The competences allowed us later to develop on our own four critical assemblies (including one for fast neutrons), then to develop MARIA, the first Polish-construction reactor. To-day MARIA is a sole nuclear reactor operated in the country and one of the youngest and the best ones in the entire Europe. Its tasks include irradiation of uranium targets used to produce molibdenum-99, a radioisotope necessary for production of cancer-treatment medicines. Each week of operation of our reactor means medicines for 100,000 hospital patient”.

Design works on an entirely Polish nuclear research reactor of a power level significantly higher than EWA’s rated power were conducted in IBJ (Institute for Nuclear Research, NCBJ predecessor) since 1960. A full spectrum of design topics were covered: from reactor core physics issues,  optimization of neutron fluxes routed outside the core (to be used in physical experiments), microscopic distribution of neutron flux inside the core, impact of materials under irradiation, hydrodynamic calculations, heat exchange calculations, to shielding calculations. The core/reflector layout concept evolved during the designing process. The final decision was to develop a reactor powered by fuel rods placed inside some separately cooled fuel channels. Such an approach made possible to apply higher thermal loads and neutron fluxes. Walls of the fuel channels constituted a barrier for fission products helping to prevent their release outside the reactor, which was an additional advantage from the safety point of view. To simplify reactor construction and to avoid problems with heavy water management, neutron reflector was made of beryllium. Horizontal channels routed neutron beams through the beryllium outside the reactor. All in all, MARIA delivers a relatively high thermal power of 30 MW and relatively high in-core fluxes: 4٠1014 thermalneutrons/s٠cm2 and 2٠1014 fast neutrons/s٠cm2. Systems experimentally verified by Polish scientists include nuclear fuel handling system, reactor control systems, reactor safeguards (e.g. the system responsible for detection of leaks in fuel elements).

„MARIA has been constructed entirely by Polish engineers/technicians. All reactor elements except fuel elements, beryllium, and graphite were produced in the country. Also the start-up, critical experiment, and the programme to attain the rated power were planned and accomplished by our experts” – added Professor Wrochna – „Experience acquired in pre­vious years during EWA’s operation and accomplishment of a compre­hensive research programme aimed to increase EWA’s power level from 2 up to 10 MW was sufficient to appropriately design, construct, and start MARIA up. Those facts are worth to be reminded also to-day, when the question how to construct, start up, and operate future nuclear power plants in Poland is still debated. All the necessary competences are still available in Polish research institutions”.