Guests from FramAtome and Warsaw University of Technology in Świerk 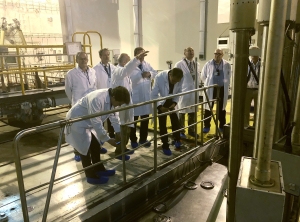 On 31 July 2019, a delegation from the French company FramAtome, with its president, Mr. Bernard Fontana and the vice president for fuel, Mr. Gauche Francois, visited the NCBJ. The French guests traveled to Poland at the invitation of the Warsaw University of Technology. In Świerk, they were accompanied by Professors Janusz Frączek – Dean of the PAE Faculty, Artur Rusowicz – Vice-Dean of the PAE Faculty and Krzysztof Badyda – Director of the WUT Institute of Heat Engineering. The delegation also included Mr. Romuald Jurkowski from FramAtome and Grzegorz Niewiński from WUT IHE. After a meeting with the NCBJ Management, Professor Krzysztof Kurek, NCBJ Director General, invited guest to visit the Maria research reactor, which is located in Świerk. The next point of the agenda was the bilateral talks. The guest were greeted by Professor Mariusz Dąbrowski – head of NCBJ Division of Nuclear Energy and Environmental Studies, accompanied by Professor Ewa Rondio – Deputy Director, Science.

FramAtome was founded in 1958. Its mission was to obtain a license for Westinghouse pressurized water reactor (PWR) projects in France. Similar agreements were made with other European countries, which led in 1962 to the conclusion of a contract for a complete plant in Chooz. Westinghouse sold its shares to Creusot-Loire in 1976. Currently, its owners are Électricité de France (EDF) (75.5%), Mitsubishi Heavy Industries (19.5%) and Assystem (5%).