Influence of gravitational darkening on the spectrum of rotating objects 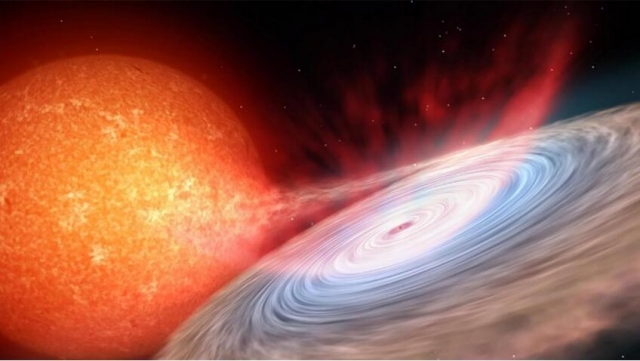 Exotic, rapidly rotating objects are of interest to astrophysicists. Polish astronomers are trying to obtain information about the physical conditions inside fast-rotating neutron stars. In a work published in The Astronomical Journal, they enriched the analysis with effects resulting from the phenomenon of gravitational darkening.

Neutron stars are one of the extreme objects in the universe. The density of matter inside them is twice the density of an atomic nucleus. Under such conditions, such exotic states as pions, kaons and even free quarks can appear in the star’s core. The star center may be in a hyperfluid state or superconducting. We are not able to obtain matter in such conditions as in the interior of neutron stars in any terrestrial laboratory. The only way to study it remains with astronomical observations. The created theoretical models describe the structure of the interior of a neutron star with the assumed properties and composition of the matter that forms it. A useful form of presenting these models for observational astronomy is the dependence of the radius of a neutron star on its mass. Therefore, determining the masses and rays for a few or a dozen stars and confronting them with the model predictions would allow the verification of theoretical assumptions about the properties of the matter inside a neutron star.

Polish team of astronomers and astrophysicists, including Ph.D. Agnieszka Majczyna (NCBJ), prof. Jerzy Madej (Astronomical Observatory of the University of Warsaw), prof. Agata Różańska (M. Copernicus Astronomical Center, Polish Academy of Sciences) and M.Sc. Mirosław Należyty, is carrying out a project aimed at determining the masses and rays of neutron stars. The method proposed by them is based on modeling the radiation spectra of neutron stars and matching them to the spectra of neutron stars observed in the X-ray range. The model they created – ATM24, takes into account many important effects, such as the scattering of photons by hot electrons (Compton scattering). Recently, the authors enriched the model with another important effect – gravitational darkening.

Gravitational darkening occurs in stars that are deformed both by tidal forces (in a binary star system) and by rotation. Neutron stars, although strongly bound by gravity, are deformed due to their rapid rotation, even up to a thousand revolutions per second. The rotating star resembles a rotational ellipsoid – a ball slightly flattened at the poles. Such a star shape causes a difference in the value of the gravitational acceleration, and thus the temperature, in particular areas on its surface. Such a star looks hotter when viewed from the pole where the gravity is greater than when viewed from the equatorial plane. In this class of objects, fast-rotating neutron stars are therefore good candidates for studying the effect of gravitational darkening. The effect of gravitational darkening has been known since 1924, but it was not taken into account in theoretical models of stellar atmospheres describing the spectral distribution of radiation. The widely accepted assumption of homogeneous gravity and temperature on the surface of a deformed star is only an approximation that the authors have abandoned in their work.

„We examined the effect of the gravitational darkening effect on the observed spectrum of a rapidly rotating, flattened neutron star” – says Agnieszka Majczyna Ph.D. from the NCBJ Astrophysics Department. „In our model of the radiation spectrum, we take into account contributions from regions with different values ​​of temperature and gravitational acceleration on the surface of a neutron star as seen by a distant observer. The model grid calculated by us is the first of its kind in the world. Our research clearly shows that the gravitational darkening effect strongly influences the shape of the spectrum and should be included in realistic models of the atmospheres of rotating neutron stars”. Scientists are still working on refining the radiation spectra models of rotating neutron stars. „The next stage of our project will be to improve our proposed method for determining the mass and radius of a neutron star and to create an extensive grid of theoretical models of radiation spectra. The improved method of matching the calculated grid of models, applied to the current or future observed spectra, will allow for the imposition of restrictions on the properties of super-dense matter that occurs inside the neutron star” – adds Ph.D. Majczyna. 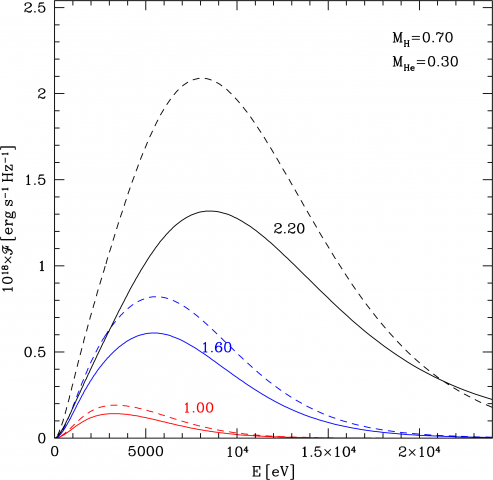 The figure shows the theoretical spectra of fast-rotating, flattened neutron stars (solid line) and non-rotating, spherical stars (dashed lines) obtained on the basis of the model for different assumed effective temperatures Teff = (1.00, 1.6, 2.20) × 107 K. The graph shows significant differences between the spectrum of rotating neutron stars and the spectrum of spherical stars.