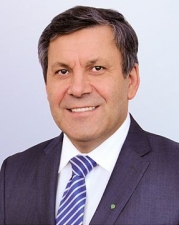 3rd Otwock Count Business Forum organized in Świerk Science & Technology Park on Friday, September 4, 2015 turned out to be a great success. The event confirmed how efficiently science is being intergrated in NCBJ with business and how NCBJ helps to integrate various local and international communities. Our honorary guest, Janusz Piechociński, Polish Deputy Prime Minister and Minister of Economy participated in the Forum discussion panel, handed over awards during 2nd Otwock County Business Official Party, and talked with NCBJ Management over possibilities of further development of the largest research institution in Poland.

„We are proud that such an important event for the Otwock County was organized on our premises. The event was an evidence that Świerk is not only a research centre, but also a place where science meets business ” – said Professor Grzegorz Wrochna, NCBJ Director General – „Our Science & Technology Park is becoming an Otwock regional centre for knowledge-based economy”.

Świerk Science & Technology Park was co-financed by European Union from the European Regional Development Fund within the framework of the Regional Operational Programme for the Mazovia Voivodship 2007-2013. The Park is to help to quickly implement R&D results in national economy. Park activities will be focussed on development of nuclear technologies and their implementation in industry, medicine, power industry, environment protection, biology, material science. The Park will offer scientists and busimen comprehensive consulting and legal services related to development of entrepreneurship and commercialization of innovative solutions. Assistance in founding the ImagineRT spin-off company (design and construction of radigraphic detectors) may be an example of such activities.

„Our guests were very impressed by changes that took place in Świerk” – pointed out Zbigniew Gołębiewski, NCBJ Deputy Director for Economic Matters and Development  – „and even more by our plans for the future. Deputy Prime Minister Janusz Piechociński was particularly interested in radipharmaceuticals and medical accelerators manufactured in NCBJ . We hope they will be among key areas of business to be discussed by representatives of the Polish Ministry of Economy with Iranian partners later this month”.