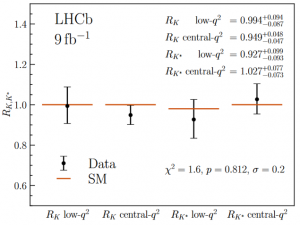 On December 20, at a seminar at CERN, the LHCb Collaboration team presented new tests for the universality of leptons, one of the fundamental principles of the Standard Model (SM) of particle physics. This rule states that the SM treats the three charged leptons (electrons, muons, and taons) identical except for differences due to their different masses. The results are consistent with MS.

In the announcement, the team of authors explains the essence of the measurements and the result:

The decays used in this analysis to study lepton universality are extremely rare. They involve the transformation of a beauty quark into a strange quark (b→s), a process that is highly suppressed in the SM and can be affected by the existence of new particles. These undiscovered particles could have masses too high to be produced directly at the Large Hadron Collider.

For these b→s transitions, lepton universality is tested by comparing the ratios of decay rates of beauty particle into different leptons. A significant deviation from these predictions would indicate new physics beyond the SM. The previous results revealed hints of deviations from lepton universality, none of which was statistically significant enough to constitute clear signs of new physics on their own. However, the observed pattern of deviations from the SM predictions might have hinted at the existence of new physics.

Special attention was focused on two ratios, RK and RK*. The ratio RK describes how often a B+ meson decays to a charged kaon and either a pair of oppositely-charged muons (K+μ+μ–) or electrons (K+e+e–). The ratio RK*0 is similar, only the meson K+ is replaced by a K*0 meson in the B meson decay. Previous RK results indicated evidence for the breaking of lepton universality in beauty-quark decays, with a significance of 3.1 standard deviations. Previous RK* measurements, while of smaller statistical sensitivity, exhibited the same coherent pattern of deviations..

The results announced today report a simultaneous measurement of RK and RK* using the full Run1 and Run2 data sample, leading to improved precision on both quantities. The simultaneous analysis allows a coherent approach to experimental effects, including cross-feed between different decays.

The results show overall agreement with the Standard Model predictions of 0.2 standard deviations.

The full announcement can be read on the experiment's website: https://lhcb-outreach.web.cern.ch/2022/12/20/improved-lepton-universalit....

The result is commented on by scientists from the NCBJ Theoretical Physics Department, professors Kamila Kowalska and Enrico Sessolo.

"The new results from LHCb conclude a years-long effort, by experimentalists and theorists alike, to understand potential departures from lepton-flavor universality in the decays of B-mesons. These observations are tightly related to the more general issue of the origin of flavor in the Standard Model, which in a nutshell is the question of why the known fermions come in three families of similar interactions but different mass.

The results show that previously reported 3-sigma anomalies in the observables Rk and Rk*, which in recent years had generated many speculations about New Physics - from postulating of new gauge interactions, to leptoquarks, to even supersymmetry, in its version without dark matter - have not withstood additional scrutiny with more data and improved background identification. The universality of interactions for electrons and muons, a basic tenet of the Standard Model, is once again confirmed.

This is undoubtedly a disappointment for particle theorists, as it adds to a long list of results that initially seemed to point to new phenomena just to disappear later on with improved experimental analysis. But it also confirms the beauty and robustness of the current paradigm, which has held tight, almost unperturbed, since the seventies. On a positive note, it is important to emphasize that the results today leave plenty of room for the discovery of new interactions that are flavor universal, as many of the anomalies in the angular observables and differential branching ratios of the decays of B-mesons remain unexplained.”

In addition, it is worth adding that scientists from the High Energy Physics Division of the National Centre for Nuclear Research participate in the work of the LHCb Collaboration and are co-authors of the published results, data from the experiment is stored and processed, among others on CIŚ servers, and fragments of the LHCb detector were made at our institute.