LIGO and Virgo extend the catalog of gravitational waves 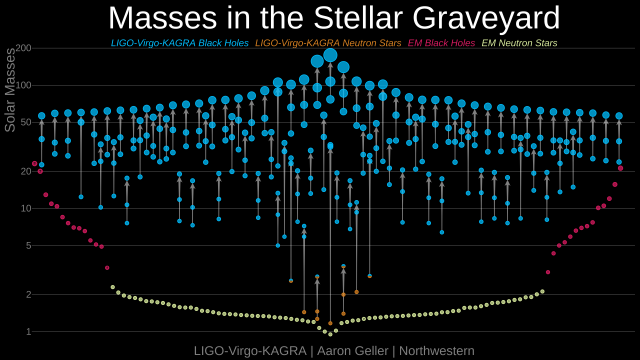 In the data from the third observatory campaign of Advanced-LIGO and Advanced-Virgo observatories (from November 2019 to March 2020), another 35 sources of gravitational waves were found, thus extending their list to 90 objects. The new data accounts for a third of the entire catalog, which is the largest extension of objects known to us from the beginning of their observations. Of the 35 objects for which the catalog of known gravitational wave sources has been expanded, 32 come from the merger of two black holes, and 3 from the merger of the black hole system with a neutron star. The most interesting source is the black hole system with the smallest neutron star observed so far by any method.

Observations of gravitational waves are a valuable source of information about objects as difficult to study using classical methods as black holes. Black holes do not emit any radiation, so unlike stars, for example, we are not able to observe them directly. So if the black hole does not absorb something (the matter falling on the black hole shines very strongly at different wavelengths, which we observe, for example, by radio or X-ray telescopes) or something does not surround it (stars around black holes can move fast enough to observe them orbit around the black hole), the gravitational waves generated during the processes involving it may be the only source of information about this object.

„NCBJ has been participating in the work of the LIGO-Virgo-Kagra consortium since the beginning of Poland’s accession to the Virgo project (2008). „– says Dr Adam Zadrożny from the NCBJ Astrophysics Department. „The work we are conducting concerns methods of detecting signals from rotating neutron stars, infrastructure enabling rapid detection of gravitational signals, and new methods of signal analysis and localization based on neural networks. „

More useful information about the catalog and how to access it: Gravitational Wave Open Science Center

Gravitational waves were predicted by Einstein’s General Theory of Relativity and are the result of a limitation on the speed of light. No information in the universe can travel faster than light, which is about 300,000 km / s, so a change in the gravitational field due to the movement of non-zero mass bodies also takes some time. According to the General Theory of Relativity, any mass (the Sun, Earth or black holes) causes space-time to be curved. You can visualize it as an elastic material (like in a trampoline) on which we put a heavy ball. The material will stretch under the weight of the ball and a recess will be created in the place where the ball is placed. Space-time behaves in a similar way under the influence of the mass of any celestial body, such as stars. When we move the ball or take it away, the material is in place, where the ball Was, returns to its original shape. In space, we have a similar effect, only on much larger spatial scales, and the information from the change in the „shape” of space-time will come with a delay in relation to the information about the mass shift. If there is a movement of mass (e. g. two black holes orbiting a common center of mass), space-time around will change its shape, creating a gravitational wave. The greater the mass and the greater the rate of change, the greater the change in the shape of the space-time in which it moves, i. e. the greater the amplitude and frequency of the wave, and thus – the greater the chance of its observation. Observation of gravitational waves is extremely difficult and requires very sensitive detectors, which is why for many years many scientists believed that it would not be possible to observe them, if at all, for a long time.

The first gravitational wave detector Was created in 1968, and its creator, Joseph Weber, very quickly announced the discovery of gravitational waves. However, errors were found in Mr. Weber’s works and the information about the discovery Was finally denied. Since then, there have been many attempts to build a gravitational wave detector, but only Advanced-LIGO detectors – as the first in history – observed gravitational waves. The waves we observe come from black holes and neutron stars, which are one of the most massive objects in the universe. However, even such a huge mass as the mass of a supermassive black hole and its motion in the universe are too weak for the effect to be measurable. Therefore, the gravitational waves that we are able to observe come from the phenomenon of merging of two very massive objects, such as the black hole-neutron star system or two black holes with masses several dozen times greater than the mass of the Sun, in addition in the last seconds of their collision, when changes in the arrangement of objects occur most rapidly.

Gravitational waves are not directly observable. What we can observe is their influence on the medium through which such a wave passes. Quite literally, a passing gravitational wave periodically increases and decreases distances. The gravitational wave passing through the Earth causes its pulsating motion, which means that the Earth begins to decrease and increase alternately. Similarly, as if we were squeezing a rubber ball in our hand. This effect is not so significant that we would notice any changes in the distance around us. That is why observatories used to detect gravitational waves are one of the largest astronomical observatories in the world (after observatories operating in a network of interferometers). LIGO observatories (two observatories in the USA) and Virgo (in Italy) are equipped with two perpendicular arms with a length of 4 km and 3 km, respectively, in which the laser beam travels many times. In each of the LIGO arms, the beam moves 280 times, which means that the full laser path in one of the arms is 1120 km. After 280 reflections are made, the beams meet together in the interferometer, where wave overlap, i. e. wave interference, occurs. If the gravitational wave passes through the Earth in the plane of the laser beams, the detectors will observe a change in the interference pattern of the beams (the length of one of the beams will change). Each of the three above-mentioned observatories lies in a slightly different plane (they are thousands of kilometers apart, so they do not lie on one plane, because the Earth is a sphere). This allows you to locate the source of the observed wave, for example by using information about which observatory observed the wave first and what were the observation delays in other laboratories.