The microspheres from Świerk help patients with liver cancer 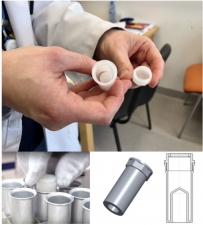 The MARIA reactor is one of the main irradiation centres for microspheres containing radioactive holmium, which are used in the treatment of liver tumors. The technology developed at NCBJ at the request of Quirem Medical - a global manufacturer of QuiremSpheres therapeutical microspheres - serves patients in several specialized centres in Europe.

Microspheres with a diameter of about 30 micrometers made of holmium polylactide (a polymer of lactic acid) are used for local radiotherapy, mainly in the case of liver tumors. At the production stage, the stable isotope holmium-165 is placed in them, and then can be transformed into the radioactive holmium-166 isotope by neutron bombardment. Holmium-166 has very useful properties. Its usage time is relatively short (approx. 27 hours). When decaying, it emits beta radiation with an energy of approx. 2 MeV. which has a tissue penetration range of several millimetres. The radioactive holmium, trapped in microspheres, is administered mainly to patients with advanced liver tumors by injecting the suspension with the microgranules into the appropriate blood vessels leading them to the tumor site. Beta radiation, by acting on a well-located area, destroys cancer cells, leaving most of the healthy part of the organ intact. This procedure is called radioemblization. It is used in the case of inoperable tumors not susceptible to chemotherapy. Holmium has two additional advantages: it also emits gamma radiation, which allows for the precise location of the injection site of the radioactive substance into the tissue and for the determination of its dose. It is also a paramagnet, which creates additional possibilities, e.g. for tracking the given specificity in the body.

The only holmium-containing microspheres currently used in therapy are produced and distributed by the Dutch company Quirem Medical B.V. as QuiremSpheres®. In 2017, a team of scientists working in the MARIA reactor in cooperation with Quirem Medical started to develop a technology for irradiating holmium microspheres. "The task required the adaptation of the reactor infrastructure and the development of new technological solutions, procedures and a new methodology for irradiating target materials" - says Dr. Eng. Rafał Prokopowicz, Head of the Reactor Research Department. "The reason for this is that each vial of microspheres contains an aliquot prepared for the treatment of a specific patient and should be irradiated such that it has the appropriate activity specified for that patient at the designated date and time of treatment”.

Each material is heated during the irradiation process. Polylactide microspheres are very sensitive to temperature - their degradation can start after reaching 60° C. However, they must retain their shape during irradiation so that they can freely reach the treated area after being administered to the patient. "To improve the irradiation conditions of microspheres, we have improved the cooling system for the containers with microspheres placed in the reactor" - explains Dr. Prokopowicz. “It was also necessary to place special radiation detectors in the reactor core, right next to the irradiation site, which constantly monitor the conditions prevailing there. We created a special algorithm and a computer program based on it. It analyses signals from detectors and facilitates a very precise determination of the irradiation time of individual microspheres containers, so that they obtain the activity required during the therapy. It is a key tool for the correct irradiation of microspheres, as the neutron flux density in the reactor changes during its operation. "

NCBJ scientists in cooperation with Quirem have also developed special vials for irradiating microspheres. They were named the MARIA vials after the name of the reactor. The secret of these vials is the special profiling of the bottom, which causes the material placed in the container to form a thin, relatively well-cooled layer. "Plastic containers are placed in metal containers, then introduced into the vertical channels of the reactor" - explains Ing. Łukasz Murawski, Head of the Irradiation Technology Department. “For even better cooling, the air inside the reservoir is replaced with helium. The containers prepared in this way are sent by hydraulic mail to the irradiation site, and after the appropriate irradiation time, they are transported in the same way to the hot chambers, where they are repacked to transport containers. Then, a special transport company transports them by express mail to the hospital, where the patient is waiting. The most common are the German and Dutch hospitals. Time plays a great huge role here, because after one day the activity of the preparation drops by half. " Since the needs for the implementation of therapy appear shortly in advance, the reactor team must be ready almost 24 hours a day, 7 days a week to prepare and conduct irradiation and dispatch of microspheres. It requires the involvement and constant readiness of many specialists.

Currently, in the MARIA reactor, vials with microspheres are irradiated for the needs of over 100 patients per year. They are used in many clinics all over Europe, incl. in Rotterdam, Nijmegen, Utrecht, Dresden, Magdeburg, Jena, Basel, Rome, Pisa, Barcelona, Madrid, Porto and others. For over three years, the MARIA reactor has been one of the few and at the same time one of the main sites for irradiating microspheres for Quirem. "Due to the growing demand for radioembolization therapies using Ho-166, this cooperation will be continued and developed" - assures Dr. Ing. Michał Gryziński, director of the NCBJ Nuclear Facilities Operation Department. "We hope to build a laboratory at the MARIA reactor, which will allow NCBJ to become a distribution centre for QuiremSpheres microspheres in Eastern Europe and Poland, where this form of therapy is not yet available."

Graphic description: MARIA containers were invented as part of the NCBJ cooperation with the Dutch medical company Quirem for the irradiation of microspheres containing holmium (165 -> 166) in a reactor. Due to their shape, the containers provide good cooling of the material, which allows the irradiation of microspheres with neutrons without the risk of sticking them together or deforming.