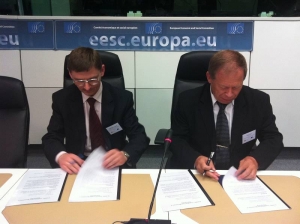 According to an agreement reached in Brussels on June 25, 2012 NCBJ has joined the international Allegro programme. Polish scientists will work within various expert panels/task forces convened to make various analyzes, to evaluate various technological concepts, and to work-out brief foredesign for the so-called “fast” reactors classified as 4th generation nuclear reactors.

4th generation fast reactors are soon going to perfectly complement network of the so-far operated 2nd and 3rd generation reactors. Their nearly 50% energy efficiency (as compared to 35-37% for the so-far operated ones) is their important potential advantage. Moreover, they are eco-friendly since they do not emit hazardous substances, are characterized by longer fuel cycles, and are capable to burn highly radioactive waste from the currently operated nuclear power plants. 4th generation fast reactors will make possible to better utilize globally available uranium resources. Currently uranium ore prices are rather low, however the price may rise in the future as soon as the most accessible geological deposits are exhausted and supplies will need to be based on some less accessible ores. Fast reactor technology may become economically feasible already within a few coming decades.

„Allegro is one of three basic projects accomplished within the framework of the ESNII programme (European Sustainable Nuclear Industrial Initiative). Objective of that programme run by European Commission is to develop 4th generation fast reactors” – explains Tomasz Jackowski, NCBJ expert on nuclear power – „In cooperation with scientists from Czech Republic, Slovakia, and Hungary we will be participating in works on gas-cooled fast reactors, more specifically on helium–cooled reactors”.

„Uranium has two naturally occurring isotopes: U-238 (natural abundance 99.3%) and U-235 (0.7%). Since thermal neutrons employed in nearly all currently operated nuclear power plants may easily split U-235 nuclei but not hard-to-split U-238 nuclei, majority of Uranium-238 remains unused – explained Kajetan Różycki from NCBJ – „However, fast neutrons may transform Uranium 238 into Plutonium, an element that may be “burned” as nuclear fuel equally well as U-235. One might say that fast neutron-based reactors produce (to a limited degree) nuclear fuel for themselves, and therefore sometimes they are referred to as “breeders”. Moreover, fast neutron reactors may more deeply burn the fuel already spent in thermal neutron-based conventional rectors. Since a larger fraction of long-lived radioactive isotopes normally left in spent fuel is used up, a shorter storage time indispensable to cool the spent fuel down is needed”.

Other reactor types also classified as 4th generation fast reactors include the so-called high-temperature reactors. They may produce hot steam of a temperature sufficiently high (typically around 600ºC, in some projects even up to 900ºC) to be usable as a source of heat in chemical industry. Such alternative sources of industrial heat  may help to reduce high costs borne by operators of facilities heated with expensive natural gas. NCBJ will soon be participating in works on that reactor type too.

NCBJ scientists may take advantage of experiments conducted at the “Maria” nuclear reactor, a multi-purpose research facility of thermal power 30 M. It is a sole research facility of that type in Poland operated in NCBJ Świerk centre and one of just 8 research reactors of a power greater than 15 MW operated in Europe. Since the time it was put into operation, the reactor has been modernised several times. The modernisations increased its safety and made possible to operate it using a less enriched uranium fuel. Current technical state of the reactor makes its operations feasible at least to 2020. If modernized one more time, it could even be operated until mid-century.

„The invitation received by NCBJ to participate in works on 4th generation nuclear reactors confirms that international experts assess works accomplished in Poland as trustworthy” – pointed out Professor Grzegorz Wrochna, NCBJ Director General – „We own and operate a research nuclear reactor (designed and constructed entirely in Poland), our highly professional staff has collected vast experience in computational methods to simulate phenomena taking place inside nuclear reactors and to verify such phenomena experimentally. I am deeply convinced that our know-how will not only help to speed-up the process of developing 4th generation nuclear reactors in the world, but will also be successfully utilized within the project to build the first nuclear power plant in Poland”.