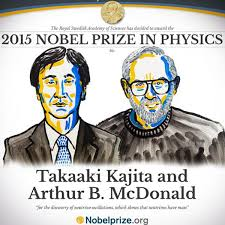 Takaaki Kajita from Japan and Arthur B. McDonald from Canada

Royal Swedish Academy of Sciences in Stockholm has announced that this year Nobel prize in physics goes to Takaaki Kajita from Japan and to Arthur B. McDonald from Canada. Polish scientists who have participated in the Super-Kamiokande Japanese experiment for many years warmly congratulate the winners.

The prize has been awarded for discovery of neutrino oscillations, which has proven that neutrino does have a mass. The prize recognizes also the Super-Kamiokande experiment in Japan and the SNO experiment in Canada.

„Neutrinos are among the most mysterious elementary particles” – explains Professor Ewa Rondio, NCBJ Science Director, Head of the Warsaw Neutrino Group – „Each second billions of neutrinos cross our bodies. Because their interactions with matter are extremely weak, they do not make any harm whatsoever. They have null electrical charge and a very small mass, therefore they are very difficult to detect. However, they are a source of plenty of interesting info on the beginning of the Universe and on properties of the surrounding matter”.

Neutrino oscillations consist in change of neutrino’s identity during its flight through space. The oscillations are a quantum phenomenon.

„There are three kinds of neutrinos: electron, muon, taon. Collectively they are known as three neutrinos’ flavours. The discovery of neutrino flavour changes was a beak-through that has significantly deepened our knowledge of the elementary particle world” – said Dr. Justyna Łagoda from NCBJ High Energy Physics Division – “The discovery has taught us that neutrinos must have a non-zero mass, which was beyond predictions of the Standard Model, the widely accepted theory of elementary particles”.

Both laureates made significant contributions to solving the neutrino oscillations puzzle: Kajita was Head of the team that analysed Super-Kamiokande experiment data, McDonald was Leader of the SNO experiment.

The Super-Kamiokande (SK) experiment has been run in the Kamioka lab in Japan since 1996. The detector is located 1 km underground. It consists of a 40 m high and 40 diameter cylinder tank filled up with ultra pure water and surrounded by over 11 thousand photosensitive devices. The devices log Cherenkov light emitted by charged particles (mainly electrons and muons) produced in result of interactions of neutrinos with water and traversing the water at a speed higher than velocity of light in water. From the logged light one can deduce neutrino kind, flight direction, and energy. Neutrinos arrive to the SK detector from a couple of sources: Sun, Earth atmosphere, artificially produced beams. Super-Kamiokande was the first to discover oscillations of neutrinos produced in upper layers of our atmosphere and finally confirmed oscillations of neutrinos coming from Sun. The latter were studied in detail in SNO, the other distinguished experiment run in the Sudbury observatory located even deeper underground (more than 2 km) in Ontario, Canada. The measured incidence rate of various flavours among neutrinos arriving to Earth from Sun was a direct evidence of the oscillation phenomenon, since Sun is capable to directly produce only electron neutrinos.

„From the very beginning of the Super-Kamiokande experiment, Professor Danuta Kiełczewska from Warsaw University was involved” – points out Dr. Piotr Mijakowski, currently also member of the SK team – „She just started involvement of Polish physicists in neutrino physics research in Japan.” Currently four strong neutrino research centres in Poland include Warsaw, Cracow, Katowice and Wrocław. Warsaw Neutrino Group – the strongest among them – is composed of scientists from Warsaw University, NCBJ, Warsaw University of Technology. Experiments in which some members of the Group are involved include Super-Kamiokande, T2K, Minos, Icarus and KM3NeT (Japan, USA, Europe). Polish physicists participate in all phases of the experiments, starting from getting ready hardware and software, through data acquisition, data analyses, to writing scientific publications in which the results (sometimes discoveries) are reported. The cooperation is constantly expanding. Polish neutrino physics groups are ever developing and gaining experience. Members of the Polish groups are well regarded by international collaborations.

A particularly numerous group of Polish scientists is currently participating in the T2K experiment, of which the SK detector is a part. The group led by physicists from NCBJ contributed to the discovery of another important channel of neutrino oscillations: change of muon neutrinos into electron ones on their way from the JPARC lab in Tokai where they are artificially produced to the SK detector 295 km away.