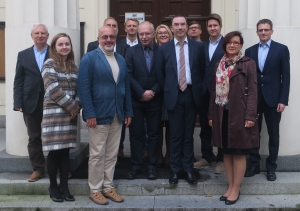 NOMATEN Centre of Excellence, created in Świerk in NCBJ, will receive 15 million euro of assistance from European Union. The project became the beneficiary of EU Teaming competition. EC NOMATEN was created in 2018 as a result of an agreement between NCBJ and Foundation for Polish Science. The project was prepared in NCBJ with the contribution from the French CEA and Finnish VTT company. The scientists from the Centre will research materials intended for use in extreme conditions.

An official note from the EU Research Executive Agency informs, that appropriate documents on funding the project will be prepared within two weeks. The final agreement on financial assistance should be signed this year during the summer.

With the aid of the received funds, the scope of operation of the Centre of Excellence, which is led by scientists of worldwide renown, will be able to be extended. The newly created research groups will be dealing with: materials resilient to extreme conditions, for example materials intended for nuclear industry (including Generation IV reactors), materials required by highly-efficient chemical installation, as well as synthesis of new drugs, especially radiopharmaceuticals. The key element is to utilise nuclear sector’s innovative solutions in general applications, with the benefit to both economy and society.

According to the European Commission experts, who are evaluating the project and its placement in Poland, a crucial advantage of the Centre is the expected positive impact on the development of the regional human capital. Implementation of the project will open new possibilities for young scientists and will provide suitable conditions for personal development for researchers, who wish to work in a field, the significance of which is constantly growing. The experts also approved plans and perspectives of publicising the expected research results, as well as the current experience of the partners of the project in this field. Organizational framework of the project, including the management structure, was also highly evaluated.

„The success of the NOMATEN project in this incredibly prestigious EU competition proves, that our scientists are regarded as valuable partners in the European Research Area” says Professor Krzysztof Kurek, NCBJ Director General. „It also proves, that we are well prepared for complicated and strict European procedures related to attaining funds for scientific activity and that Polish public institutions, such as National Centre for Research and Development, Ministry of Science or Foundation for Polish Science are capable of effectively providing researchers and scientific institutions with financial aid”.