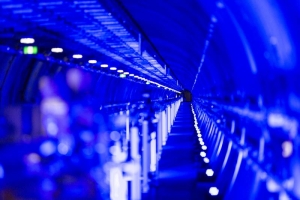 DESY and European XFEL GmbH company have jointly announced that commissioning of a superconducting accelerator that is to feed the European XFEL laser has just been concluded in research centre in Hamburg. The team that built the accelerator included scientists and technicians from Poland. NCBJ is a partner in the project.

The European XFEL free electron laser is the mightiest research facility of its kind on Earth. 2.1 km long linear superconducting accelerator is its first stage. The machine will be accelerating electrons to 17.5 billion electron-volts energy. In subsequent stages the electrons will be split into several beams, of which each will be directed on another set of strong magnets referred to as undulators. While travelling slalom-like paths through inhomogeneous magnetic field electrons will be forced to emit laser radiation within X-ray band. Properties of the radiation will make possible to study various physical, chemical, biological and engineering issues.

The DESY/XFEL announcement has informed that the accelerator has just been successfully put in operation. Superconducting resonator cavities of the accelerator need to be operated at a very low temperature; they were cooled down to –271°C for about two months before the first tests of the accelerator could have been started. Commissioning of the accelerator is a major milestone on the way to scientific use of the entire laser, scheduled for this year fall.

On March 29 Poland, one of the European XFEL project shareholders, paid the last instalment of its costs share totalling 8.75 million Euro. In-kind Poland’s contribution* has been estimated for 19 million Euro; more than 96% of the goods and services were already delivered by some research institutes and companies from Cracow and Wrocław, as well as by NCBJ. Parameters of every delivered component were in detail tested in DESY. NCBJ, a formal shareholder of the European XFEL GmbH company responsible for development and subsequent operation of the European XFEL facility, is coordinating all Polish deliveries.

*Polish in-kind contribution to development of the European XFEL laser: