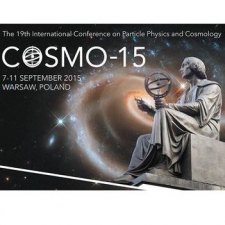 Our Universe continues to be a huge mystery for scientists. Participants of the COSMO-15 international conference held in Warsaw between September 7-11, 2015 are scrutinizing fundamental issues regarding origin, evolution, and structure of the Universe.

The last decades have seen many spectacular successes of physics in revealing nature of our Universe. However, we already know that the “normal” visible (barion) matter is a small fraction of our Universe, which mostly consists of some dark matter and dark energy. What are these dominant cosmos constituents? How the Big Bang looked like and will we ever be able to describe it using some scientific tools and methods? Maybe our Universe is just one of the parts of some obscure multiverse? Similar issues of a fundamental significance for contemporary theories in physics are the main topics of the COSMO-15 international conference held in Warsaw between September 7-11, 2015. This year 19th edition of the conference has attracted almost 250 astrophysicists, cosmologists and elementary particle physicists from the entire world.

„Annual COSMO conferences are a forum on which we discuss major issues in our research field and deliberate what methods might help to solve mysteries of our Universe. We are convinced that contemporary theories of elementary particles and new hypotheses emerging from the string theory will make possible to attain some progress in the field” – said Professor Leszek Roszkowski from NCBJ, Chairman of the COSMO-15 Organizing Committee and Scientific Committee.

The Old Library Building at the Warsaw University main campus is the Conference venue. An open public debate (panel discussion) entitled "Is modern physics exceeding science boundaries?” planned for Thursday, September 10 afternoon is going to be a particular important event among all lectures and presentations taking place the entire week until Friday, September 11.

Participants of the COSMO conferences will discuss current advances and future directions of research on Big Bang, early stages of evolution of the Universe, and structure of the Universe in cosmological scale. Key issues include: nature of the dark matter/dark energy which account for more than 95% of all energy/matter in the Universe; microwave background radiation and cosmological conclusions including hypothetical primordial gravitational waves; origin and evolution of large-scale cosmic structures, the earliest stages of Universe evolution (just after the Big Bang), in particular issues related to the cosmic inflation. Possibilities regarding theoretical description of the Bog Bang itself and some science-fiction-like ideas that our Universe is just one of the parts of some obscure multiverse will also be analysed in some lectures and presentations.

„We are looking for answers to many questions which are just crucial for the entire research field. For example elementary particle physic offers several probable explanations what the dark matter may be. We are operating at a very interesting point of contact between two – seemingly – quite different worlds: the world of huge cosmic structures (size of a galaxy or larger) observed using astronomical instruments, and the world of the tiniest constituents of the matter, usually investigated using some particle colliders, such as LHC in CERN” – said Professor Roszkowski.

New generation of dark matter detectors will start operations in various points of the world within the coming months. The detectors are expected to either detect one of the dark matter particle types among those proposed by theoreticians, or practically definitively rule out its existence. This year COSMO conference event will therefore be proceeding in an atmosphere of  a cautious excitation mood, which is perfectly understandable.

The first COSMO conference was organized in Ambleside (north-west corner of England, close to the English-Scottish border) by Professor Roszkowski (then at University of Lancaster) in 1997. Famous attendants included Stephen Hawking (University of Cambrigde) and Andrei Linde (Stanford University). Both scientists are still members of the Conference Supervisory Committee, chaired from the beginning by Professor Roszkowski. Later editions of the Conference were organized in many leading research centres of the world, including CERN (Geneva), Chicago, Cambridge and Tokyo.

„I am very satisfied that this year COSMO Conference has made its way to Poland for the first time ever. Its an expression of recognition for the local scientific community and of hope that our field of research will be developing in Poland. The COSMO Conferences consistently attract the most renowned scientists. However, the fact that ever growing number of young much spirited theoreticians with plenty of fresh ideas have been attending the Conferences is no less important. Our meetings have become a major event of the year for young people involved in research on fundamental aspects of our Universe” – pointed out Professor Roszkowski.