Some best experts in nuclear reactor safety convened in Warsaw 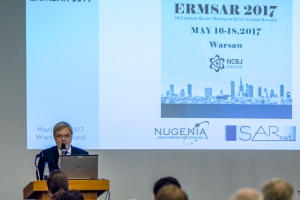 More than 160 experts from around the world discussed on how to keep nuclear power plants safe even in case of extremely improbable failures during the prestigious ERMSAR2017 international scientific conference organized by NCBJ in Warsaw.

ERMSAR2017, 8th European Review Meeting on Severe Accident Research international scientific conference was held in Warsaw Novotel-Airport hotel between May 16 and 18, 2017. Attendees included representatives of nuclear science community, industry, regulatory bodies, Technical Support Organizations from Europe and other parts of the world involved in studies on preventing severe accidents in nuclear reactors and mitigating accident consequences. This year edition was organized by NCBJ.

“Our conference was an excellent opportunity to discuss the established and to propose some better methods to prevent severe accidents in nuclear reactors and to mitigate accident consequences” – explains Professor Mariusz Dąbrowski, Head of NCBJ Nuclear Power Division, Chairman of the ERMSAR2017 conference Organizing Committee. “The Fukushima accident has demonstrated that safety of nuclear facilities is not a local issue in which only proper agencies and scientists from a single country should be interested” – adds Eng. Maciej Skrzypek from NCBJ, Secretary of the Committee. “Since 2011 international collaboration in that field has been extremely intensified. Polish scientists are also participating. We have conducted some advanced analyses of power reactors operated in other countries, we have been granted access to software codes used to simulate reactor behaviour, we have been gaining valuable experience. On one hand the prestigious ERMSAR2017 cyclic conference organized this time in Warsaw was a recognition of competences gained by our experts, while on the other hand it brought numerous opportunities to extend the cooperation and to gain new partners.”

Topics discussed during the conference included such important issues as cooling the reactor core in emergencies, preventing sudden release of hydrogen, protecting the environment against adverse consequences of nuclear accidents. More than 160 experts in the field from Europe, USA, India, Japan, Korea and China attended. Many of them were surprised that so large and competent group arrived to Warsaw. The most interesting presentations were vividly commented. For example, Pascal Piluso’s (CEA, France) opinion was that behaviour of a molten core submerged under a water surface was the most interesting topic presented during the conference. The topic is so new that the mechanisms governing processes running in such a situation have not yet been clarified. Nuclear safety organizations unanimously consider that topic equally important and worth of an in-depth analysis as the topic of interactions between molten reactor core and concrete structures of the reactor safety containment; the latter topic has been studied quite intensely. Polish scientists participate also in the In-Vessel Melt Retention research project how to best retain molten core inside reactor safety containment. That project is currently under accomplishment within the Horizon 2020 programme.

ERMSAR conferences are a joint initiative of NUGENIA (the NUclear GEneration II & III Association) and SARNET (the European Severe Accident Research NETwork of Excellence). For the first time Poland was entrusted with a task to organize such an important scientific conference on nuclear reactor research. This fact is undoubtedly linked to the planned Polish Nuclear Power Programme and reflects some significant achievements of Polish scientists in the field of nuclear safety analyses.

After the three day-long conference was concluded the attendees paid a visit to the Świerk research centre.

The conference organized under the patronage of Krzysztof Tchórzewski, Polish Minister of Energy was opened by Dr. Józef Sobolewski, Director of Nuclear Energy Department in Ministry of Energy, and Professor Krzysztof Kurek, NCBJ Director General.