Heavily dust-obscured ultramassive star-forming galaxies in the early Universe contributed significantly to the cosmic star formation rate. But, how did such objects manage to build up their stellar masses at a relatively short time? Were they once starburst galaxies or were they gradually forming stars, exhausting their hydrogen reservoirs?

In the last two decades, astronomers have gained massive knowledge of how galaxies form and evolve. This advancement in the field of extragalactic astronomy was coupled with the rapid development of the instrumentation aspect of astronomy, which led to accumulating a large amount of observations of galaxies at different epochs of the lifetime of the Universe. With giant multiwavelength datasets, we realized that galaxies are not just entities in space and time. They are more like living organisms: They are born, they get old and then they die! Such evolution of a lifetime of galaxies is governed by the amount by which they form stars. Logically, and since hydrogen is the main ingredient of star formation, galaxies will build up their stellar population until they exhaust their hydrogen reservoir. 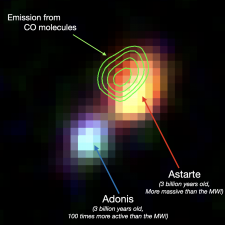 The two galaxies as seen
with the VISTA telescope,
with ALMA detection of Astarte.

To make things even more ambiguous, it turns out that some of the galaxies during the cosmic noon were even more massive than old galaxies like our own, the Milky Way. This has made the field of extragalactic astronomy one of the most active themes of research, since it involves interdisciplinary fields such as physics, chemistry and analytical modeling. And given the amount of good quality data, it became possible to trace these ultramassive galaxies when the Universe was younger, and this led to a lot of natural questions such as: how did these galaxies manage to become so massive at an early time? Were they once exhibiting an over-to-normal star formation activity, or were they very efficient in turning their hydrogen into stars?

To answer these questions, and to investigate the nature of these ultramassive objects, an international team of researchers under the leadership of Mahmoud Hamed, along with his PhD supervisor dr. hab. Katarzyna Malek (Astrophysics Division of the NCBJ), and with close collaboration with dr. Laure Ciesla and dr. Matthieu Béthermin (both from the astrophysics laboratory of Marseille - LAM), shed a new light on the physical processes involved in the interstellar medium in these “giants”. To better understand the nature of such heavily dust-obscured galaxies, they detected an interesting system of two galaxies at the epoch of the cosmic noon, and analyzed it with different wavelengths observations in order to constrain their underlying physics and chemistry. This system consists of one ultramassive galaxy and its satellite galaxy, which we called Astarte and Adonis respectively, as the Phoenician gods.

Astarte is not only ultramassive, but it is also ultra-dusty - it is very bright in the infrared spectrum, which is a thermal radiation emitted by the dust in the interstellar medium. In fact, Astarte is so dusty that it is almost not visible in the shorter wavelengths at ultraviolet and visible light. This is a common feature of dust behavior in galaxies, it absorbs shorter wavelength photons which are typically the same size of the dust grains on average.

Adonis is less dusty and is not bright in the longer wavelengths of infrared bands, and together with Astarte, it forms an interesting system of opposites, which can reveal a lot about their evolution and can possibly answer the puzzle of how these massive galaxies managed to become more massive than their local environments in very short timescale.

The ultramassive Astarte was observed with the Atacama Large Millimeter Array (ALMA), as part of an observation program (PI: Béthermin). ALMA can observe cold dust and emission from excited molecules in the interstellar medium. With this observation program, we detected the emission coming from the carbon monoxide (CO) from the molecular clouds of Astarte. With this CO emission, it was possible to estimate the mass of hydrogen in that galaxy, based on conversion ratios that are already established in galaxies of the local Universe, and from our knowledge of the expected abundance ratios in the interstellar medium of such dusty galaxies like Astarte.

The various wavelengths through which Astarte and Adonis were detected helped in modeling the total spectrum coming from them. This in turn allowed us to constrain the physical properties of the system, such as how many stars do these galaxies have and at what rate new stars are being born. The surprising element of this study was that the estimated rate at which Astarte is forming stars is too high, much higher than what can be explained from its hydrogen reservoir. In fact, if Astarte continues to form stars at this rate, it will exhaust all its gas in the molecular clouds in the next 220 million years, which is rather short compared to the timescales that we deal with in the Universe. Adonis on the other hand, is forming too many stars for its mass, this is what we commonly refer to as a strong starburst.

One important conclusion of this study was that the ultramassive Astarte, which is more massive than our old and mature Milky Way, is dying; Astarte is turning its hydrogen into stars by inertia from its past when it was once a starburst too, like its neighbouring Adonis. This indeed motivates the quest to understand how very massive galaxies form and evolve, and how they deplete their resources while converting them efficiently into stars.