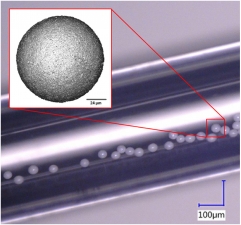 In a few years, the means to fight liver cancer may include yttrium oxide gel microspheres produced at the National Center for Nuclear Research in Świerk. The results of the latest research on the impact of new microspheres on biological material appear to be promising. If further tests confirm them, in the future microspheres can be produced quickly and cheaply, precisely matching their characteristics to the needs of a particular patient.

Malignant liver tumors are dangerous diseases with high mortality. One of the promising methods of their treatment is radioembolization. During it, millions of radioactive microspheres are introduced into the tumor tissue. There is increasing evidence that in the future these microspheres can be manufactured quickly and cheaply to meet the therapeutic needs and anatomy of specific patients. Such conclusions are drawn from experiments on new microspheres with the yttrium 90Y isotope, manufactured and tested by a team of employees of Warsaw scientific and medical institutes with a significant participation of the National Center for Nuclear Research (NCBJ) in Świerk. Radioembolization involves the administration of millions of microspheres of appropriate diameter and activity to carefully selected blood vessels leading to the tumor tissue. When the microspheres get stuck in narrowing arteries, they cut off the tumor from the supply of nutrients. At the same time, their radiation for a strictly defined period of time kills sensitive cancer cells in the immediate vicinity.

„The microspheres we have been dealing with for several years contain yttrium oxide. Yttrium, after irradiation with neutrons in the reactor, is converted into the radioactive isotope 90Y with a half-life of 64 hours. In practice, this means that each microsphere, after being introduced into the body for ten days, would interact with the electrons it emits on cancer cells located at an average distance of about three millimeters,” says the research project leader, PhD. Eng. Edward Iller, prof. NCBJ from the POLATOM Radioisotope Center belonging to NCBJ. New micrograins with spherical shapes are produced by the sol-gel method. It is a complex, multi-stage process, improved several years ago in terms of the requirements of radioembolization of the liver by scientists from POLATOM and the Institute of Nuclear Chemistry and Technology in Warsaw. The first step is to prepare a colloidal solution – a sol – containing compounds-precursors of the target particles, including yttrium oxide. The sol is then properly coagulated, after which the solvent is removed and the sol is converted to a gel. After drying, the gel turns into a powder that stabilizes at high temperature. The process is fully controlled and allows the production of microspheres with the desired diameters ranging from 20 to 100 micrometers.

„In the case of our microspheres, we could individualize the therapy by selecting the activity of the microspheres in terms of the anatomical structure of the liver and tumor in a particular patient. However, before the first clinical trials take place, we need to conduct detailed studies on the effects of our microspheres on cells and tissues in the body. We have just finished the first series”, says Maciej Maciak, MSc. Eng. from the Department of Radiological Metrology and Biomedical Physics of the National Center for Nuclear Research, the first author of the article in the journal „Radiation Physics and Chemistry”.

The latest tests, financed by the National Science Center, examined the physical, radiometric, dosimetric and biological properties of the microspheres. First of all, it Was established that after irradiation with neutrons, high concentrations of the radioactive isotope 90Y were present in the samples. In order to calculate the doses of absorbed radiation, an appropriate theoretical model Was constructed and a number of computer simulations were carried out using the Monte Carlo method.

In the reported series of studies, however, experiments with biological material were of particular importance. Research topics related to the use of microspheres with yttrium oxide for radioembolization of the liver have been developed from the beginning in close cooperation with radiologists from the Military Institute of Medicine in Warsaw. It Was here that in vitro experiments verified the effect of microsphere radiation on the number of colorectal cancer cells. In accordance with the predictions and simulations, it Was observed that the number of cancer cells decreased with the increase in the number of microspheres interacting with them. In addition, at the Warsaw University of Life Sciences, histopathological examinations were performed on an animal model. As a result, it Was established that the microspheres were located in blood vessels as expected.

The results of all experiments confirm that the new yttrium oxide microspheres are a promising alternative to currently available commercial agents and qualify for further biological and preclinical studies. Before that happens, the team involved in the project is already planning to refine the microsphere manufacturing technology so that it is ready for potential applications beyond the laboratory scale.