Professor Adam Sobiczewski has passed away 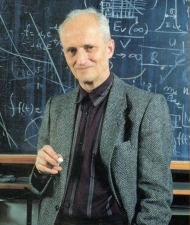 Professor Adam Sobiczewski passed away on October 20-th 2017. He was a world-class expert in theoretical nuclear physics, in particular, the structure and properties of heavy and superheavy nuclei. His most conspicuous scientific achievements were theoretical predictions of the spherical magic shells at Z=114 and N=184 (together with Gareev and Kalinkin) and of a new stability region for the A>100 deformed nuclei (jointly with D. A. Arseniev and V. G. Soloviev).

Adam Sobiczewski was born on August 21, 1931 in Skierniewice, Poland. He attended the B. Prus secondary school in Siedlce, and obtained the secondary education certificate from the S. Żółkiewski high school in Siedlce in 1950. In 1955 he graduated from the Faculty of Mathematics, Physics & Chemistry of the University of Warsaw (speciality: mathematics), and for the second time, from the Warsaw University of Technology, Faculty of Communications, in 1956 (speciality: ultrashort waves). In 1964 he obtained his PhD in mathematics/physics from the University of Warsaw.

The scientific interests of Prof. Sobiczewski concentrated on the ground-state and stability properties of heaviest nuclei, including those yet to be discovered. His efforts resulted in predictions of new regions of relative nuclear stability which included extensive studies of the spontaneous fission half-lives of nuclei. The prediction of relatively stable deformed super-heavy nuclei close to the Z = 108, N = 162 doubly-magic deformed nucleus has been partially confirmed experimentally; this region is still being intensively investigated in laboratories. Elements Z=110 and Z=111 were synthesized at GSI Darmstadt in 1994; their observed properties agreed very well with those theoretically predicted. Experimental confirmation of the theoretical predictions by Prof. Sobiczewski and his co-workers has been recognized in numerous lectures given at scientific conferences on the structure and synthesis of the heaviest nuclei, as well as in numerous papers published in both professional and popular journals, including Physics Today, Science and Discovery. The term “deformed super-heavy nuclei” introduced by Prof. Sobiczewski and his co-workers is more and more often used in the scientific literature. Theoretical predictions of relatively long-lived superheavy nuclei close to Z=114, N=184 paved the way to extend the Mendeleev table by numerous elements which may exist exclusively thanks to quantum shell effects, and to investigate their physical (in some cases also chemical) properties. The experimental efforts by Russian physicists at Dubna, Japanese physicists at Riken, US physicists at Livermore and German physicists at Darmstadt brought the largest known atomic number to Z=118, with half-lives very much in accord with theoretical predictions.

Prof. Sobiczewski’s role in building the strong position of the physics of heavy and super-heavy nuclei, both at NCBJ and in Poland, has been vital. He supervised 10 PhDs. For many years he was the Head of the Nuclear Structure Group in IBJ ( later in the Institute for Nuclear Studies, IPJ). His achievements have brought him numerous honours and awards: 1st Degree Individual Award from the National Commission on Atomic Energy (1976), Award in the Sciences from the Foundation for Polish Science (1995), the G.N. Florow team award from JINR (Dubna, Russia, 1997), the Alfred Jurzykowski Foundation Award (New York, USA, 1997), an honorary doctorate from the M. Curie-Skłodowska University in Lublin (2001). He was a Corresponding Member of the Polish Academy of Sciences (PAN) from 1989, and a Regular Member since 2013; a Member of the Polish Academy of Arts and Sciences in Cracow (PAU) since 1997. In the years 1977-2003 he was the editor-in-chief of the "Advances in Physics" journal, published by the Polish Physical Society; he was subsequently its honorary editor. In 1988-1991 he represented Poland on the Scientific-Coordination Council for Theoretical Physics of the Joint Institute for Nuclear Research (JINR Dubna, Russia), and since 1992 he was a member of the JINR Nuclear Physics Program Advisory Committee. In the years 1997-2006 he participated in the work of the Central Committee for Scientific Degrees and Titles.

Adam Sobiczewski was also awarded with Gold Cross of Achievement by the Polish Government (1974), the Knight’s Cross of the Order of Polonia Restituta (2005), and the A.Sołtan Medal (IPJ, 2001).