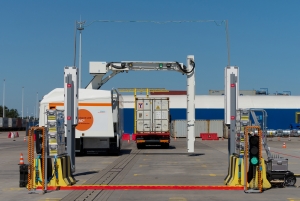 For a few days, the only deep-water container terminal in Poland (DCT-Gdańsk) has been a place for testing of the dangerous and illegal cargo detection system, designed during the C-BORD project, which has been funded by the EU programme Horizon 2020. This project aims to use and maximize the integration of the available methods of noninvasive inspection of container cargo. Combining many methods will allow for more accurate control and, at the same time, the inspection will be less cumbersome for carriers and companies operating in international trade.

The project, with the full name „Effective Container Inspection at Border Control Points”, is carried out by 18 partners from 7 countries of the EU. Among those, there are nine technology providers (including National Centre for Nuclear Research), four potential recipients and users (including the polish National Revenue Administration) and five expert parties, including the European Commission.

Scientists, entrepreneurs and customs officers working of the project would like five different independent inspection techniques to be used during control. The most well-known and widespread technique of cargo inspection is traditional X-ray scan, generated by mobile accelerators. By default, radioactivity of cargo is also checked by dedicated detection gates, equipped with advanced software that allows to identify radioactive elements inside the container. There is also a technique, that could be called an electronic dog: the device „sniffs” air samples from the closed container. It can detect tobacco, narcotics and explosives. „Methods of inspecting shipping containers are so far limited to scanning them with monoenergetic X-rays produced by stationary or mobile RTG. scanners” – explains Agnieszka Syntfeld-Każuch, PhD, who leads the team from NCBJ working on the project. „Admittedly, the manufacturer of the device provides advanced software for visualization the insides of the container, but it’s the vigilant eye of the operator that spots the abnormalities in the image while scanning the cargo. That is why we decided to use several non-invasive techniques, that can supplement the RTG. scanners and aid the operator in making a decision in the situation, when there is a suspicion of discrepancy with the cargo declaration. ”

None of the five technologies utilized in the C-BORD project requires opening up the cargo. The two wo most innovative ones are based on activating the materials using neutrons and high energy X-rays (photofission). Both neutrons and high energy gamma rays penetrate the container and additional packaging easily. Interacting with individual atoms of the cargo material they force them to emit radiation that can be detected and immediately analyzed outside. The response from all the isotopes in the periodic table is a little different and that’s why it is possible to deduce what’s inside the container rather accurately. If that response doesn’t match the cargo declaration, this could mean trouble for the carrier.

Designing devices, that can provide fast, convenient and understandable information to the operators is a challenge for the researchers. It requires coordinated actions from different parts of the system and gathering all the data in one place. It also requires to use intelligent systems, that would learn proper interpretation of the gathered data based on the benchmark controls and later – on everyday practice. The tests carried out in Gdańsk consist in, among other things, checking the effectiveness of the controls based on specially prepared cargo. Similar tests were carried out on the Hungarian-Serbian border, and next ones are planned for September in the Rotterdam harbor.

For the project, NCBJ prepared detectors, designed and built specifically for studying photofission, mechanical systems necessary for smooth operation of detection systems during the neutron activation, and also it coordinates the tests in Gdańsk. „Our mechanical system is designed to position the neutron system with high precision, along with the shielding and detectors. ” – describes Paweł Sibczyński, PhD, from the Electronics and Detection Systems Division in NCBJ. „The neutron system is particularly heavy and, at the same time it needs to be positioned in the whole height of the container. It also has to be durable in tough conditions. The neutron technique can detect, for example, smuggling of tobacco, illegal drugs and explosives. The neutron system will be a second line of inspection, if the image from the RTG. scan won’t give a clear answer to whether there is any illegally transported cargo inside the container. ” The researchers are already preparing for the last phase of the tests in September. „For the first time in history, tests of detecting nuclear materials using photofission will be carried out in a real setting designed for high energy scanning in the Maasvlakte harbor in Rotterdam. ” – explains Sibczyński, PhD. „In the process of photofission, the activated nuclei of the fissile material break apart into smaller fragments, emitting characteristic gamma radiation and neutrons – both prompt and delayed. This method of inspection allows us to detect nuclear materials, even, if they’ve been hidden with shielding materials. ” Paweł Sibczyński, PhD, is a co-inventor of the system for detection of fissile materials based on registration of prompt neutrons and delayed gamma rays. The system Was designed in NCBJ as one of the tasks in the project.

The C-BORD project is worth almost 12 million euros. Its coordinator is the French Alternative Energies and Atomic Energy Commission (CEA).