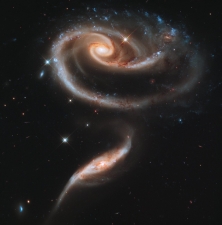 For the first time, merging pairs of galaxies have been found using an identical method in both simulations and observations of the real universe, using artificial intelligence. The co-author of the pioneering work is Dr. William Pearson from the Astrophysics Department of the Fundamental Research Department of NCBJ.

The last Nobel Prize has shown how important and fascinating the field of astrophysics is. Many physicists are trying to discover the secrets of the universe, its history and future. Now, for the first time, astronomers have identified galaxy mergers in simulations of our universe and the real universe using an identical selection method.

The study, lead by Lingyu Wang (Netherlands Institute for Space Research, SRON) and including William J. Pearson (National Centre for Nuclear Research, NCBJ) and Vicente Rodriguez-Gomez (Instituto de Radioastronomía y Astrofísica, IRyA) has, for the first time, developed and applied a trailblazing method to consistently identify galaxy mergers in both simulations and the real universe.

While galaxy mergers are not commonly seen, we know that most galaxies have participated in one or more mergers during their lifetime. This process usually takes hundreds of millions of years and leads to multiple galaxies merging into one. This is a significant part of the history of our universe, which we can see in images from powerful telescopes, e.g. on photos from the Hubble telescope.

One such uncertainty is identifying galaxy mergers. For simulations this is simple: just follow a galaxy and see if and when it merges with another galaxy. For the real universe, it is not so simple. As galaxy mergers are rare in the real universe and the times scales are billions of years long, astronomers must closely examine the images of galaxies to see if they look like they should be merging or have recently finished merging. Evidently these two methods are vastly different.

“Using images from a simulation of our universe, as these are known to definitely be mergers, an Artificial Intelligence (AI) was trained to be able to accurately identify galaxy mergers.” – says William J. Pearson, PhD, from the NCBJ Astrophysics Division, co-author of the study. “For the AI to be useful, these images of the simulated galaxies were further processed to appear like they had been observed through a telescope before being used for training. This AI was applied to further images from the simulation as well as observations of the real universe to consistently identify galaxy mergers.”

For this pilot study, the trend of how the fraction of galaxies undergoing a merger changes as the mass of the galaxies change was compared between these AI identified simulation and observation mergers. With the real and simulated mergers identified in the same way, it was found that the trend for smaller galaxies is very close between the simulations and real universe. For the larger galaxies there are differences, demonstrating that there is still work to be done on the simulations to make the higher mass galaxies’ mergers more realistic.

The paper titled „Towards a consistent framework of comparing galaxy mergers in observations and simulations” has been accepted for publication in Astronomy & Astrophysics. It can be found under following address: https://www.aanda.org/component/article?access=doi&doi=10.1051/0004-6361...

Picture: This image of a pair of interacting galaxies called Arp 273 was released to celebrate the 21st anniversary of the launch of the NASA/ESA Hubble Space Telescope. The distorted shape of the larger of the two galaxies shows signs of tidal interactions with the smaller of the two. It is thought that the smaller galaxy has actually passed through the larger one. Credit: NASA, ESA and the Hubble Heritage Team (STScI/AURA)