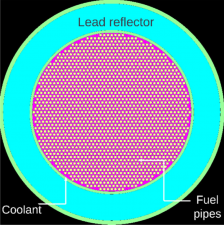 Comprehensive research and models of their operation are an important stage in the introduction of the concept of generation IV nuclear reactors. On the basis of the analyzes, the passive safety of the DFRm reactor Was confirmed, thanks to the determination of the temperature coefficient of reactivity. In a recent paper published in the International Journal of Energy Research, the calculations of the transients for such a reactor were presented for the first time.

The nuclear dual fluid reactor (DFR) is a device operating on fast neutrons. Due to its operating principle, it can be regarded as a combination of a lead-cooled fast reactor and a molten salt reactor. The fuel of the DFR reactor can be both molten uranium salts – DFRs reactor, as well as a eutectic mixture (a mixture having a lower melting point than its components separately) of uranium and chromium – DFRm reactor. In the case of molten salt fuel, there are many analyzes of reactor operation. The metallic fuel variant has not yet been thoroughly investigated, but is of interest to scientists.

The passive safety of the DFRm reactor Was confirmed thanks to the precise determination of the temperature coefficient of reactivity, which turned out to be negative. This means that when the temperature in the reactor core increases, it automatically reduces the number of reactions taking place, causing a return to a safe state (as we wrote about in this article: https: //www. ncbj. gov. pl/aktualnosci/ujemny-wspolczynnik-reaktywnosci-reaktora-dwuplynowego). In the latest work on the DFRm reactor, which Was published in the Journal of Energy Research, an analysis of temperature reactivity coefficients Was performed on the basis of a reactor model made using the Serpent code, based on the Monte Carlo method. The authors of the article also proposed a reactivity control system and made calculations of the reactor transients.

Thanks to the created model, the optimization procedure of the DFRm reactor parameters, such as fuel and coolant temperature distributions in the core, their maximum flow velocity, or the loss of neutrons outside the core, Was performed at the same time. The temperature of both the fuel and the molten lead used as a coolant must be appropriate, both to prevent the freezing of both components and to prevent overheating and damage to the silicon carbide structural materials. Moreover, molten metals can corrode and erode components, so it is important to minimize their flow rate. Additionally, the paper also proposes the sizes of the fuel and coolant circuits (length and size of sections). Based on the set criteria, many cases were calculated, but only some of them met all the required conditions to finally choose the most optimal one. 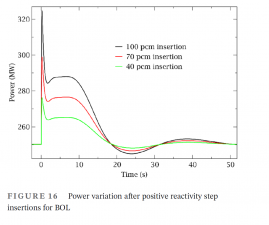 The paper presents for the first time the modeling and calculation of transients for the DFRm reactor, such as the reactivity step (both positive and negative), as well as superheating and supercooling of the coolant. For this purpose, researchers used the modified TRACE code, an advanced software for analyzing reactor systems developed by the US nuclear regulatory authority. In the case of introducing reactivity, it Was shown that the cases of negative and positive reactivity are almost completely symmetrical to each other (with the accuracy of the absolute values ​​of the increase or decrease of the reactor power). The model shows the changes in power and maximum fuel temperature during such a process, which makes it possible to determine whether the values ​​for safe operation are not exceeded. In the tested case, the maximum temperature after adding the reactivity reached about 1500 K., which leaves a large margin, taking into account the safe temperature for silicon carbide, amounting to about 1650 K. In turn, the introduction of negative reactivity caused the fuel temperature to drop to about 1200 K., with a melting point of about 1133 K.

The second transition state that Was modeled and analyzed Was overheating or overcooling of the coolant. It consisted in increasing or reducing the heat received from molten lead (at the base thermal power of the reactor of 250 MW, cases of coolant removal from 100 MW were investigated in the overheated variant to 350 MW in the supercooled variant). Again, changes in reactor power and maximum fuel and coolant temperature were determined to verify the safety of the silicon carbide construction materials. „In all tested cases, from overcooling by 40% to overheating by 40%, the maximum temperature reached Was far from the upper safety limit” – says MSc. Tomasz Hanusek. „Nevertheless, the minimum coolant temperature at one point Was only 40K. from the melting point of lead, which is a small margin. This means that it may make sense to raise the operating temperature of the entire system, which will balance the safety margins. Another solution could be to increase both the coolant and the fuel flow.”

Research by MSc. Tomasz Hanusek are carried out as part of the international doctoral studies PHD4GEN conducted by NCBJ, devoted to the latest technologies of nuclear reactors. The full results of the research can be found in the article: