How to check if turbulence is dangerous for the reactor? 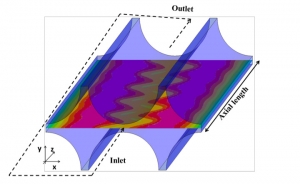 Doctoral project of Tomasz Kwiatkowski, MSc Eng, has been nominated by the international association NUGENIA to be presented in the young scientist competition at the periodic world conference FISA 2019 / EuradWaste’19 beginning on the 4th June in Romania. The Polish scientist researches impact of turbulent flow of the collant on safety of nuclear reactors.

Practically all operating nuclear reactors are cooled with liquid or gaseous substances flowing through the reactor core and thus collecting the heat. In nuclear power plants this heat is used to generate steam, which propels the turbines, which then generate electricity. The most frequently used coolant is water, but here are types of reactors that use liquid metal or gases. Coolant – no matter which type – does not flow smoothly through the spaces inside the core. Real flow is full of local vortexes or turbulence. This phenomenon is well known in our everyday life: when the turbulent material flows through household pipe system we usually can hear distinctive, usually unpleasant sounds. They are created by the vibrating pipes, which are being excited by the vortexes. In nuclear reactors, the important problem created by turbulence is the uneven cooling of fuel elements and reactor vessel walls. These can lead to higher tensions and faster material fatigue, which can cause, for example, undesirable microfractures. The material, of which the installation is made, must be resistant to such phenomena. It is important to strive to reduce the scale of adverse processes as much as possible.

„It is very hard to perform measurements showing the course of events connected to the turbulence in real-life constructions” – explains Sławomir Potempski, PhD, leader of MANHAZ Excellence Centre – a workshop in the NCBJ Division of Nuclear Energy and Environmental Studies. „Most of the time such measurements could create additional disturbance themselves, which would impact the credibility of the results. Of course, the measurements would be very costly and performing them inside a working reactor is just hard to imagine.”

Designers of nuclear reactors usually take some assumptions about the needed construction materials’ endurance for various predictable and unpredictable disturbances. „Safety reserve” is very large, but even so the scientists and engineers are striving to minimise the scale of unknown factors. This knowledge can be substantially expanded using mathematical models and large processing power.

„We would like to be able to model the flow in the whole reactor vessel using the tools of computational fluid dynamics (CFD)” – says Tomasz Kwiatkowski, MSc Eng, from the NCBJ Division of Nuclear Energy and Environmental Studies. „Right now we can perform limited analyses for single fuel cassettes, parts of space between the rods or simplified models of the whole vessel. Such calculations have been made by our team. Accuracy and efficiency of the models we use have been validated in situations, when it was possible to compare the theoretical predictions with experiment results. In particular, this year our Dutch partners and we have published a numerical analysis of phenomena occurring, when suddenly, during and emergency, there is a need to insert additional coolant into the reactor vessel, because of loss of normal coolant. These calculations could be then confronted with previously made measurements, which have been acquired in Helmholtz Zentrum Dresden Rossendorf on a real-life model of the vessel. As it turned out, our calculations, made alongside our colleagues from Nuclear Research and Consultancy Group (NRG) in the Netherlands, describe well what has been measured in the experiment.”

Flow of the coolant around the fuel elements is equally important process. Both calculations and attempts of measurements in the channels, which simulate the space in-between the rods, have been made by scientists from other institutes, but the calculations were based on highly simplified mathematical models. The difficulty lies in the fact, that performing calculations based on an advanced model requires very large computing power and is time consuming.

„The constructors of the facility are in need of a tool, which will provide a very credible and rather quick description and assessment of the situation.” – explains Kwiatkowcki, MSc Eng. „The project, which I will present on the competition held during the FISA/EuradWasta conference in Pitesti, Romania, provides validation of simplified models and, possibly, their proposed improvement based on their comparison with the advanced model. Owing to this, if there’s a need, you will be able to use the simplified model without fearing, that the results will be far from reality. Work for this project will be carried out together with colleagues from NRG, who are our collaborators for some time, and the calculations are made in Świerk Computing Centre (CIŚ) with the help of specialists working there.”

„We are very happy for the success of Mr Kwiatkowski” – emphasises Professor Mariusz Dąbrowski, head of NCBJ Division of Nuclear Energy and Environmental Studies. „Despite a very strong competition from the young scientists form the leading European institutes, in March the project has been highlighted during the NUGENIA Nuclear Generation II & III Association conference in Paris – international society bringing together world-class experts and supporting research and development for safety of nuclear reactors. Thanks to this recognition the project has been put on a list of five works recommended by NUGENIA for the competition during the Pitesti conference.”

Science and research cooperation between NCBJ and NGR, which results, among other things, in Mr Kwiatkowski’s project, has been ongoing for over two years. „From the very beginning our cooperation has been conducted according to two rules” – adds Professor Dąbrowski. „These are: win-to-win strategy and science-in-return. NCBJ has shared enormous computing power – up to 10 000 cores from CIŚ, which was necessary to create high-credibility databases. In return, Afaque Shams from NGR, having significant experience in conducting such calculations, has taken the responsibility of substantive leadership of the project.”

The FISA 2019 / EuradWaste’19 conference – the largest periodic European meeting of experts from the field of nuclear safety, organized for the ninth time – will take place between 4th and 6th of June in Romanian nuclear institute Pitesti. Romania is organizing the event as a result of this country’s ongoing presidency in the EU. Results of the young scientists competition will be announced on 6th of June after presentation from each participant.