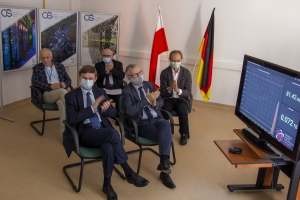 A high – speed internet connection for scientific data transfer at 100 Gbps is already in operation between the DESY research center in Hamburg and the National Centre for Nuclear Research (NCBJ) in Świerk. The full functionality of the connection was demonstrated on 12th June during a ceremony attended by Polish and German Deputy Ministers of Science, which took place simultaneously on both sides of the link.

Thanks to this connection the NCBJ’s Świerk Computer Centre (CIŚ) will become the second alongside the DESY IT center – data collection and processing hub generated by the European XFEL experiments – the most powerful X-ray free-electron laser in the world. During the ceremony, the directors of European XFEL and NCBJ signed two contracts, paving the way for the full implementation of the project to use the CIŚ computing power for XFEL experiments. The agreements concern the conditions for ensuring the quality of data collection and processing services and the security of the scientific data and user data processed.

The project to build a fast dedicated link between Hamburg and Świerk has been implemented since 2017. On the Polish side, it was financed by the Ministry of Science and Higher Education and on the German side by the European XFEL GmbH. Links with similar or higher capacity exist in Europe but usually support a large number of different users. Connecting over a distance of a thousand kilometres of such speed is rare for one particular research infrastructure. Its launch required the construction of appropriate infrastructure and software in both Świerk and Hamburg. The data obtained from European XFEL experiments will be automatically directed to data centers in Hamburg and Świerk. The project assumes that for users – physicists, chemists, or biologists, conducting free-electron laser research – the place of actual calculations should be irrelevant. Both centers should provide users with appropriate software and support in data processing and analysis, as well as the ability to perform simulations and calculations within theoretical models.

The European XFEL has 3.2 km long and is a unique free-electron X-ray laser designed for scientific research and development, for instance: in the field of material physics, the construction of molecules, the dynamics of chemical and biological processes at the atomic level. The device allows 3D imaging on complex biological particles (DNA) and filming of complex chemical reactions. In particular, in recent weeks the scientists using the device, have been involved in the global research program due to the COVID-19 pandemic.

The use of two computer centres – in Hamburg and Świerk – to collect and process the huge amounts of data generated during the experiments carried out by the scientists at the European XFEL, will not only accelerate the data analysis process but also reduce the accidental loss of some of the valuable information collected. „The fact that the second XFEL laser data center is being built in the NCBJ is a huge success for Polish scientists” said Deputy Minister Professor Grzegorz Wrochna at the ceremony. „The Ministry and the NCBJ have been preparing this project for several years. This success is a recognition by the European XFEL Member States for the Polish contribution to the construction, launching, and operation of the XFEL”.

„Polish scientists, engineers and technicians are very pleased to be co-creating this wonderful device. ” – stressed the director of the NCBJ Professor Krzysztof Kurek. „We are pleased to be able to participate in the processing of important data obtained by the international teams of researches. Of course, they will also include scientists from Poland. The experience gathered within the cooperation with the XFEL will be very helpful in conducting the research on the Polish free-electron laser PolFEL, which is created at the NCBJ in Świerk". The cooperation of the CIŚ computer centre with the Hamburg centre will confirm the prestigious position of the NCBJ and enrich it with important competences. CIŚ is constantly evolving and further investments are planned, supported by the Ministry of Science and Higher Education.

European XFEL Was established and managed within European XFEL GmbH, with the participation of 12 European countries. The NCBJ is the Polish shareholder of the company. The total cost of building a European free-electron X-ray laser Was over a billion euros.