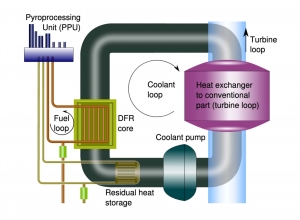 NCBJ scientists are analyzing the concepts of future solutions for new generation nuclear reactors. One of the promising solutions is the two-fluid reactor (DFR). In a paper published in the April issue of the journal Progress in Nuclear Energy, researchers showed that DFR has a negative temperature reactivity coefficient, which is one of the key figures for the passive safety of a nuclear reactor.

Safety is a very important issue related to nuclear energy. The temperature coefficient of reactivity plays a special role in its behavior, which is one of the main indicators determining the passive – based directly on the fundamental laws of physics – the safety of nuclear reactors. A negative value of the temperature coefficient means that with the increase in temperature caused by a greater number of nuclear reactions, the reactor automatically reduces the number of these reactions, returning to the previous and completely safe level. The analysis of this parameter in the case of the DFR reactor is carried out by the authors of the paper published in the April issue of the journal Progress in Nuclear Energy. „Our calculations and simulations show that the DFR reactor is characterized by a negative reactivity coefficient during the entire analyzed period of the reactor operation „– says PhD. Eng. Jakub Sierchuła, co-author of the thesis, who last year defended his doctoral dissertation at NCBJ on a new concept of a metal two-fluid reactor DFRm with a capacity of 250 MWth. „In the calculations and simulations, we took into account both the Doppler effect and changes in material density resulting from temperature changes in the core. Three material factors were analyzed: for fuel, coolant and reflector. We have found that they are all negative. The fuel has the greatest impact on the total temperature coefficient of reactivity, and the coolant the least, with the change being more strongly dependent on the density change than on the cross sections. In other words, in the analyzed case, the change in density is much more important than the Doppler effect."

The authors also determined the dependence of the change in the effective neutron multiplication coefficient as a function of temperature. „When analyzing the obtained curve, it can be noticed that it is not entirely linear and is characterized by a small square deviation” – explains PhD. Eng. Jakub Sierchuła. „The comparison of the linear and square term of the obtained function made it possible to determine the value of the linear coefficient of thermal expansion for the DFR reactor, which is between the values ​​for the fuel (U-Cr eutectic mixture) and the coolant (lead), which proves the correctness of the created model."

The DFR reactor combines the advantages of various Generation IV concepts such as MSFR, LFR, ultra high temperature VHTR. In combination with compact dimensions, high power density, the use of appropriate materials, no need to use expensive and complicated pressure systems, it can significantly reduce the investment outlays and costs related to the operation of the unit. „As a fast neutron reactor, DFR increases the use of nuclear fuel, and even serves to duplicate it, that is, the production of additional fuel, making it possible to use it in other reactors,” explains co-author of the work, Prof. PhD. Mariusz Dąbrowski, head of the NCBJ Nuclear Power and Environmental Analyzes Department. „The DFR reactor can also run on spent fuel from the currently dominant LWR light-water reactors in the world, previously treated as radioactive waste. In this way, it can recycle this fuel as well as other radioactive waste by burning actinides such as isotopes of americium, curium or neptunium. It is interesting that the use of spent fuel from LWR reactors extends the operating time of the DFR reactor without fuel replacement by up to 20 years, making it a nuclear battery. An additional advantage of the DFR reactor is the ability to process fuel during its operation, thus taking full advantage of the advantages of using liquid fuel. This allows the excess reactivity accumulated in the fuel to be kept at a low level during the entire service life, unlike solid fuel reactors, where the large excess reactivity must be compensated from the outset."

The principle of operation of the two-fluid reactor Was patented in 2013 by a group of six scientists from the Berlin Institute of Solid State Nuclear Physics led by Prof. Konrad Czerski. Currently, the Canadian company Dual Fluid Energy Inc. is working on the practical implementation of this project. founded in 2021 by the creators of the concept.