The NCBJ delegation participated in the opening ceremony of the PID Polska Research and Development Center. The center conducts research in the area of ​​radiographic inspection and detection. Thanks to cooperation with Polish scientific institutions, it will be possible to develop proprietary technologies applicable both in industrial X-ray detectors and cargo scanners.

NCBJ has been cooperating with PID Polska for many years. In 2016, we signed an agreement for the commercialization of the Polish Cargo Control System „CANIS”. The system resulting from this cooperation has been operating for two years at the railway border crossing in Kuźnica Białostocka, and the construction of new installations and the development of new solutions are planned in the near future. 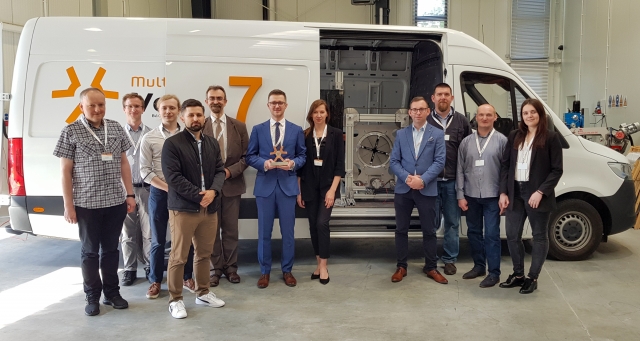 During the meeting, which took place on 2nd of June this year at the new headquarters of the PID Polska Research and Development Center located near Warsaw, PID’s scientific partners presented the progress and prospects of their own research on new technologies related to cargo inspection. NCBJ presentation prepared by prof. Sławomir Wronka concerned the backscatter imaging method developed and patented by NCBJ scientists. The AGH University of Science and Technology (ASIC integrated circuit for the CdTe pixel detector) and the MakoLab company cooperating with PID Polska in the use of artificial intelligence also prepared their presentations. During the ceremony, a prototype mobile Vesper-Van scanner Was presented – an innovative imaging scanner developed jointly by PID and NCBJ, in which the image is made up of backscattered photons. In recognition of the cooperation so far, Mikołaj Wroniszewski, President of PID Polska, handed over to Michał Wójtowicz, NCBJ Deputy Director for Innovation and Implementation, the award „For scientific support in the development of innovative technologies of the future”.

PHOTO 1. NCBJ delegation with the hosts in front of the prototype of the Vesper-Van scanner (E. Dymowska / NCBJ)

PHOTO 2. Statuette of the PID Polska award (A. Ślązak-Gwizdała / NCBJ)