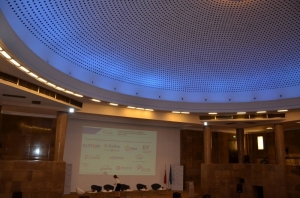 The World Energy Outlook report presented by Faith Birol (IEA) during the Power Ring 2014 10th Int’l Conference was an introduction to an expert debate on the role of nuclear power in the world economy. Professor G.Wrochna, NCBJ Director General participated in the debate.

The World Energy Outlook 2014 report has pointed out that nuclear power impacts both the economy and the environment protection. Since 1971 that power industry branch has helped to avoid emission of about 56 Gigatons of CO2, a greenhouse gas. Moreover, countries that have failed to develop their own nuclear power industry are suffering inadvertent economic consequences, including higher electricity prices. Such findings are of particular concern for Poland, a country that intends to develop its nuclear power industry. Authors of the report have also identified factors that make future of nuclear power in Europe insecure in spite of numerous unquestionable benefits of that technology: energy-related government strategies, high investment expenditures, issue of public awareness and acceptance. The situation is quite different in South Korea and China, countries which are dynamically developing their nuclear power industries so that share of nuclear power in their overall power supplies will soon become significant. 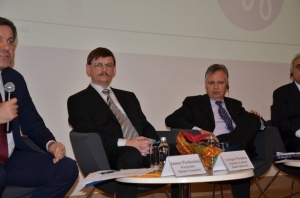 „Korea example shows that nuclear power development programme can stimulate development of the whole country. For the last 20 years Korean industry has not only become self-sufficient in nuclear power, but also joined a rather exclusive club of major suppliers of nuclear reactors in the world” – remarked Professor Wrochna at the beginning of his speech.

To develop nuclear power industry means not only to build power plants and to acquire know-how necessary to safely produce cheap electricity. It also means to stimulate development of high technologies applicable in numerous other branches of economy and in every day life of modern societies. Just look at nuclear medicine, a branch of medicine employing ionizing radiation to protect human health/life. Radiopharmaceuticals commonly used in medical imaging and cancer therapy would be impossible to manufacture without nuclear reactors. By the way, NCBJ POLATOM centre supplying now innovative radiopharmaceuticals to 76 countries all over the world is an example of a Polish success story in that field.

Countries that are developing nuclear power should engage their domestic industry as much as possible and need to develop their own supporting base. Poland’s situation is favourable since various nuclear facilities have been operated in the country already for about 60 years. MARIA, 30 MW  research reactor operated in NCBJ and currently the largest of the facilities is a successor of five other reactors (including four critical sets) operated in Świerk in the past. Other existing NCBJ’s scientific and technical resources (including the newly developed Świerk Computing Centre which plays the role of an IT support for the entire Polish power industry sector) may also help to accomplish government’s nuclear power programme. And there are other assets in Poland as well, just to name Ministry of Economy’s subordinate Institutes (Institute of Nuclear Chemistry and Technology, Central Laboratory for Radiological Protection), or R&D works/educational activities in the field nuclear power conducted by several leading Polish technical universities.

„Even if our R&D base is excellent, still its role in the Polish nuclear power development programme has not yet been formally established” – said Professor Wrochna – „Neither Polish Nuclear Law nor the Polish Nuclear Power Programme document specify tasks assigned to research institutions, leaving open such questions like support for Polish nuclear safety authorities in working out safety evaluation reports”.

Experts are indicating that the process of licensing nuclear reactors will need some specific IT support. If nuclear safety authorities will be seeking such a support in an open tender announced last minute, the proceedings aimed to develop the first nuclear power plant in Poland may be disrupted or delayed.