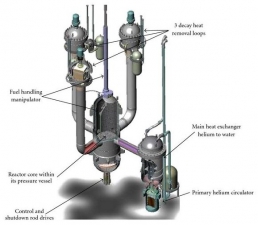 Coordinators of the Allegro research project run by the ESNII consortium and members of the V4G4 association Steering Committee met on October 21–22 in NCBJ. The so-far done research on 4th generation gas-cooled nuclear reactors have been summed up and schedule of works planned for the coming months was accepted.

NCBJ joined the Allegro project in June 2012. Allegro is one of the three projects run by the ESNII (European Sustainable Nuclear Industrial Initiative) consortium. Objective is to develop 4th generation fasts reactors (breeders). Their nearly 50% energy efficiency (as compared to 35-37% for the so-far operated ones) is their important potential advantage. Moreover, they are eco-friendly since they do not emit hazardous substances, and are capable to burn highly radioactive waste from the currently operated nuclear power plants.

– “Within the Allegro project framework our scientists together with their colleagues from Czech Republic, Slovakia, and Hungary have teamed up in some expert task forces whose task is to get ready/analyse technological concepts and design assumptions for helium-cooled fast reactors” – explains Tomasz Jackowski, NCBJ Director Proxy for Nuclear Power. – “The meeting in NCBJ was an opportunity to sum up the already performed works, to precise some organizational matters, to discuss key technical issues, and to plan activities for the coming months. One of the meeting outcomes was also an agreement in the matter of intellectual property rights signed by all parties”.

Members of the V4G4 association Steering Committee met also in NCBJ at the same time. The Visegrad 4 for Generation 4 Reactors Centre of Excellence is an association of research institutes from the Visegrad Group countries, involved in research on nuclear power. NCBJ in Poland, ÚJV Řež in Czech Republic, VUJE a.s. in Slovakia, and MTA EK in Hungary are coordinating participation of other research units from their respective countries. The Allegro project is based on resources of that group.