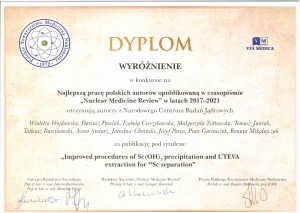 Once again, the article describing the research of scientists from the POLATOM Radioisotope Center Was among the five most cited publications of the Nuclear Medicine Review journal in 2017-2021. The diploma awarded by the Editorial Board Was presented to the authors during the 17th Congress of the Polish Society of Nuclear Medicine in Białystok on May 26–28, 2022.

During the Thursday session, prizes were awarded for the most cited papers that appeared in the Nuclear Medicine Review journal in 2017-2021. Among the awarded works, the following publication Was awarded:

This is not the first such achievement of OR POLATOM scientists, similarly, as many as three of their works published in 2015-2017 were awarded, for which the authors received diplomas during the PTMN Congress in 2018: https://www.ncbj.gov.pl/aktualnosci/prace-polatomu-wsrod-najwyzej-notowani-publikacji-nuclear-medicine-review

Congratulations to the authors and we wish you further success in their research!