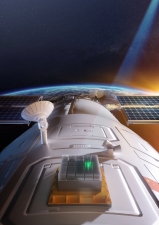 POLAR detector was launched in September 2016 on board of the Chinese space laboratory Tiangong-2. Scientists just published the first research results in Nature Astronomy. POLAR is the result of cooperation between Switzerland (University of Geneva and Paul Scherrer Institut), Poland (National Centre for Nuclear Research) and China.

Gamma ray bursts (GRB) are observed as very short signals of roentgen radiation originating from sources situated at cosmological distance from Earth. Those sources emit more energy than the Sun in its whole lifetime and nobody really knows how it happens. Directions of the bursts do not repeat, therefore it is probable that they correspond to an irreversible cosmic catastrophe. Currently GRB are being observed roughly once a day by a few satellite detectors. From the 60 s and 70 s scientists have been measuring directions of the bursts, intensity and energies of gamma ray photons and their variability with time. POLAR has opened a new „window”: measurement of polarization of this radiation.

The observed polarisation requires an orderly source of emission, and the speed of the change of polarisation suggests some new, unknown characteristic of the emitter. This phenomenon might be very interesting. If we want to better understand the process of emission of GRBs, we need to build a much bigger detector than POLAR. Currently, scientists are preparing a much more efficient detector POLAR-2 and hope to launch it in 2022 on the next Chinese space station.

Co-creators of key elements of POLAR experiment were polish scientists and engineers from National Centre for Nuclear Research*. About 10 people were directly involved in the work, including employees from NCBJ Cosmic Ray Laboratory in Łódź and from NCBJ Electronics and Detection Systems Division in Świerk. One of the achievements of this cooperation was designing and construction of the central system, which selects the right events (trigger) and designing its software. Due to the fact of limited communication of satellite device with Earth, transmitted data need to be selectively filtered on the orbit. For example, events caused by ionising particles of cosmic rays are discarded. The most interesting events are the ones, when at least double scattering of gamma ray photon was recorded in a very short time in the detector. Such cases are used to determine the polarisation of gamma ray photons from bursts.

In the NCBJ lab in Łódź, scientists constructed a prototype of nigh voltage generator for POLAR’s 25 photomultipliers. It is a project of a great electrical engineer, the late Jacek Karczmarczyk, who passed away in 2016. Beside the technical work, Polish team also contributed to all phases of testing of the detector during qualification and functional tests. All elements of the detector must withstand extreme conditions: vacuum, sudden shocks, large load factors, high and low temperature and high doses of radiation.

Plastic scintillator detectors, which are used to detect gamma radiation, were also prototyped in Świerk. A matrix of 1600 such detectors is the heart of POLAR.

The information was prepared on the basis of POLAR experiment press release.

*Fragments of article by Anna Zwolińska, Dominik Rybka and Jacek Szabelski „Polowanie na błyski gamma” were used in description of NCBJ contribution. The article was published in magazine of Polish Academy of Sciences AKADEMIA 3/47/2016, page 64.